We didn't just get drunk and watch football, sorry "soccer" while we were in Suwon. We also did some cultural stuff and took a look round Suwon's Hwaseong (Fortress and city walls).

Suwon is the provincial capital of Gyeonggi-do, the province we live in and we'd already been there once albeit briefly to get our alien registration cards sorted out. Since we didn't see much beyond the immigration office that time we thought it was worth coming back to check out the sights beyond that exciting office. 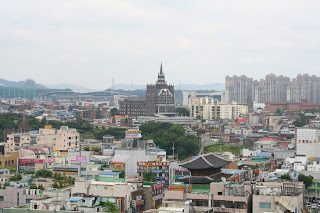 The view from the Suwon city walls over the city, you can see Suwon world cup stadium in the distance. 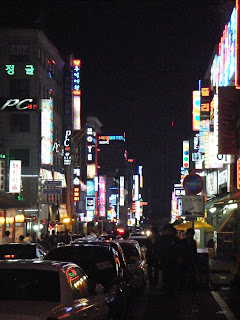 The bright lights of Suwon 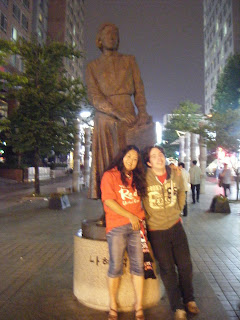 Rowan and Choon Hwa posing by a statue of Korea's first woman western style artist Na Hye Seok
Suwon is the only completely walled city left in South Korea and it is famous for its large, beautiful Hwaseong Fortress and the Hwaseong Haenggung Palace contained within it which was built on the orders of King Jeongjo in 1796. Unfortunately, most of the fortress was destroyed during the Japanese occupation as they had a policy of liquidating Korean culture and history and it was further damaged during the Korean War. However, luckily for us, the fortress has since been restored to its former glory if not its former size. The walls are about 10m tall most of the way round and are dotted with sentry posts and ornate entrance gates. 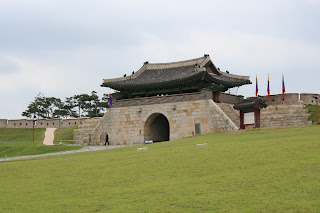 The east gate of the old city walls 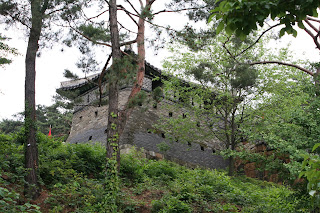 Castle on top of the hill within the fortress walls. 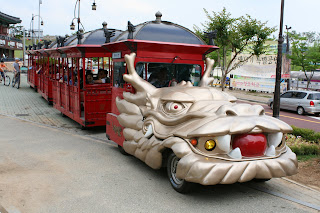 The 'Hwaseong Train' that we unfortunately didn't manage to catch. 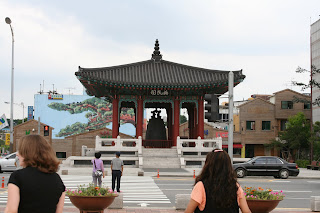 This is Suwon's 12 ton bell which is rung for special occasions including New Year and Chinese New Year. 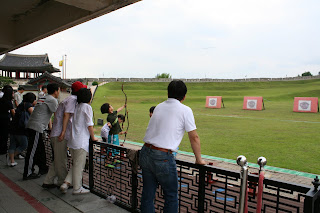 An archery range just by the walls. Apparently the Koreans are extremely good at archery so don't mess with the man with the bow!

The palace itself was really beautiful and we happened to arrive in time to see a recreation of a traditional Korean dance and music performance in the main courtyard which was a good excuse for me to get my camera out. 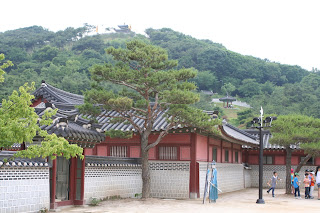 Suwon palace is set on the side of a mountain. 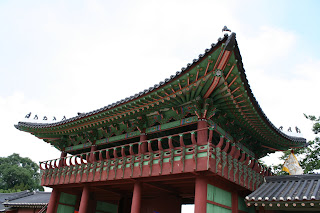 Beautifully painted roofs in the palace 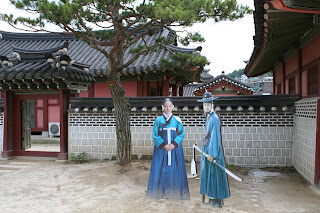 Yes, they're not real, they're cardboard cut-outs of characters from a Korean historical drama that was set in the Joseon Dynasty era and filmed in the Hwaseong Palace. 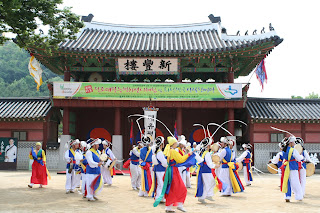 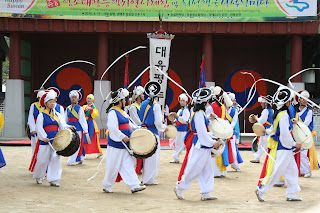 Dancers again, the dance was traditionally performed to ensure a good rice harvest. 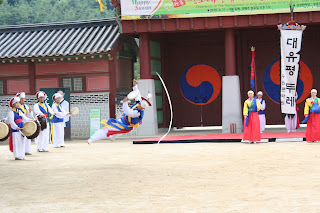 Every now and again one of the dancers leapt in the air and threw themselves round 180 degrees on their side. 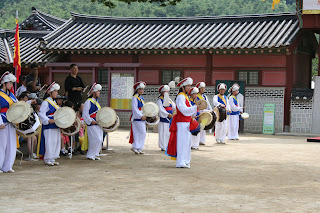 The drums they're beating are called chang ku. 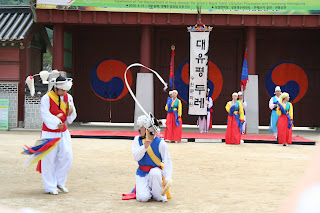 The two lead dancers facing each other.
Within the palace there were various traditional cultural activities that you could pay a few won to do including pottery making, fan painting and paper making. Rowan chose to go down the traditional costume route and was dressed up in traditional Korean armor. As it was an incredibly hot day and the armor was pretty thick he was boiling alive under it all but it was worth it! Once he had it on he became a magnet for Chinese tourists who all wanted their photos taken with him. In Korea the excitement of seeing a westerner is enough for lots of people to want to take your photo or have their photo taken with you and seeing a westerner in Korean traditional armor just increased the level of interest. 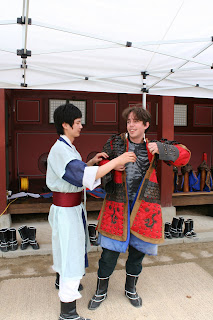 Getting fitted for the armor 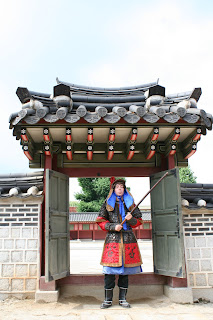 Rowan stands guard in a doorway of the palace. 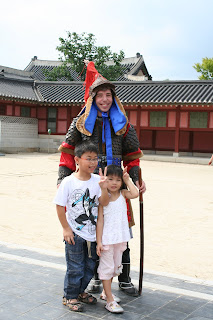 Rowan posing with some Chinese kids. 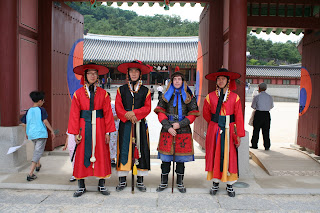 With the guards at the palace. 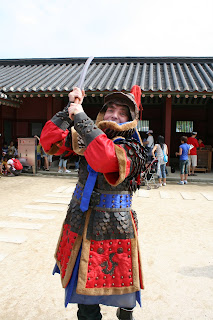 Attack of the Korean ninja!
Suwon is traditionally known as "The City of Filial Piety" (caring for your parents) and according to the Rough Guide to Korea it has "what may be the world's greatest concentration of high quality public toilets - armed with the relevant pamphlet from the tourist office, it's even possible to fashion some kind of toilet tour." Wish we had known that before we went, that could have been an interesting tour to take! However, our friend Dean has reliably informed us that though Suwon's public toilets are very nice they never have any soap, hot water or toilet paper which is a shame (though standard for Korea). Still, we definitely plan to go back to Suwon at some point to ride the dragon train, see the martial arts performances at the palace and maybe to check out some of those palatial toilets too!
Posted by Sophie at 10:56