After our time looking round the historic sights (or should it be sites?) of Gyeonju, our plan had been to hit the south coast and go to Yeosu, a city on a peninsular sticking out of the south coast of Korea which features a full size replica of admiral Yi Sun-sin's turtle ship (a famous old Korean warship design). Unfortunately we'd spent more time than we'd planned in Samcheok so we were running a bit behind schedule so decided to skip Yeosu and go straight on to Mokpo.
We arrived in Mokpo pretty late after our mammoth journey from Gyeongju so we were pretty knackered. Luckily the first motel we walked into had ok rooms for 30 000 won a night and was right next to the bus station. Once we checked into our motel first thing to do was get some clothes washed, so we piled everything into the bath and washed them with shampoo and by stamping on them in a Bacchanalian fashion as if we were pressing grapes - must have been a pretty strange sight but it did the job! Then we just collapsed into bed- it had been a long day.
The next day we had a bit of a lie in to make up for the late night. When we got up, we caught a taxi down to the train station to check out the tourist info then walked to the ferry terminal to book our tickets for Jeju. The tourist info was pretty useless, the woman inside the booth had pulled the blinds down and we had to rattle them and shout to get her attention. The ferry cost 29 000 won each and bizarrely departs from the international terminal, despite the fact Jeju is Korean territory. Our first impressiosn of Mokpo wasn't all that favourable, it is a port city and like most port cities more than a little rough around the edges. We got hassled by guys hawking ferry tickets in a variety of languages as soon as we got off the coach including Russian and German! (When we didn't respond they'd just try another language on us). It was about the only time in Korea when we've ever felt even vaguely intimidated. We didn't see an awful lot of the city but what we did wasn't particularly attractive, I guess our friend was right when he described Mokpo as "the armpit of Korea", poor old Mokpo!
After booking our tickets we headed back to the bus terminal and looked for a bus to take us to Boseong. We were headed for the Boseong green tea fields. This was always going to be one of the highlights of our journey as the tea fields are famous for their beauty. We went to what appeared to be our bus and asked the driver if he was going to Boseong, he gestured for us to get on board so of course we did but when we were still sat there after our buses departure time we started to worry a bit (Korean buses tend to leave right on time if not a few minutes early). Our fears were confirmed when the ticket inspector came down the bus and told us we were on the wrong bus. After a 45 minute wait for the next bus we managed to get on the right bus and were on our way to the tea fields. The journey took about 1hour 45mins to Boseong town. We arrived in Boseong to find we'd just missed the bus to the tea plantations and since we were already running late we decided to catch a taxi which cost us about 9000 won. 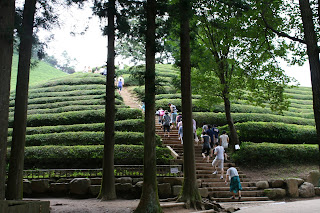 The start of the path up through the tea fields - it was a steep climb to the top! 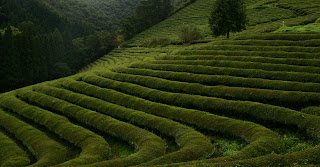 Our pictorial tribute to Brian in Jeollanam-do. 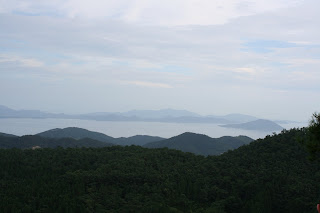 The view from the top of the tea plantation out to the East China sea in the distance. 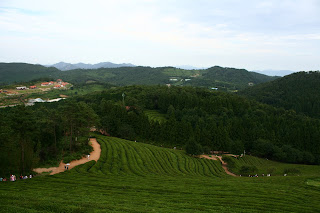 Looking back down at the plantation. 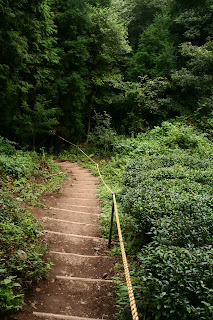 The path looped around and went back down through some woods and past some small waterfalls. 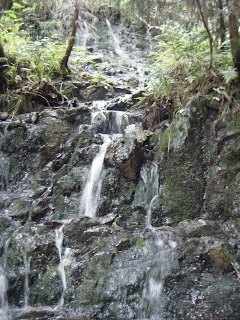 Waterfall on the path through the woods 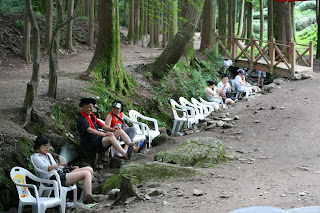 At the bottom of the hill weary walkers could rest their feet in a cool stream while sitting on a patio chair in the stream. 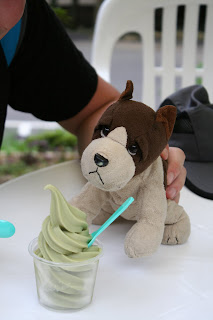 Our dog Fawkes tries some green tea ice cream, he said that it was nice ice cream but was rather let down by tasting a bit like a cold cup of tea.
After a bus ride back to Mokpo we picked up an alarm clock to get us up in time for the ferry, had some ramyeon for dinner and crashed out. We were up at ten to seven to catch the Jeju ferry and were on the ferry by eight, but it didn't depart until nine so we probably could have left it a little later. It was a good thing we'd brought our passports with us because despite not crossing any international borders it seemed we needed them to catch the Jeju ferry. 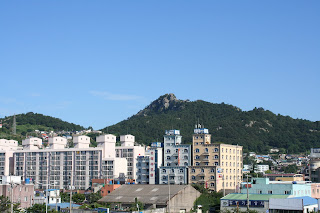 The only pictures we took of Mokpo were taken from the ferry as we were leaving. In fairness we didn't spend much time in the city, but it didn't seem like we missed much. 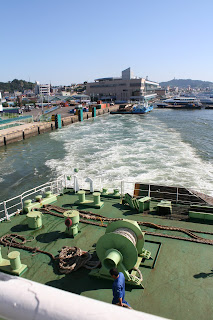 Pulling out from Mokpo ferry terminal. 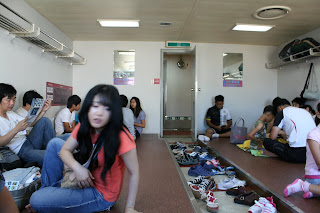 This was our cabin for the ferry journey, we didn't get seats, just a space on the floor along with about 20 other people. 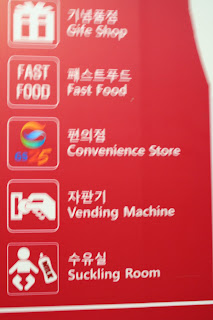 The ferry had all modern conveniences including a suckling room! 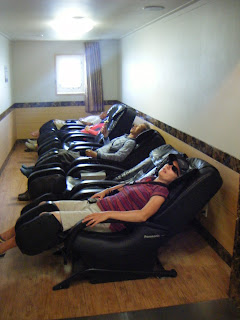 Sophie enjoying the massage chairs on the ferry. 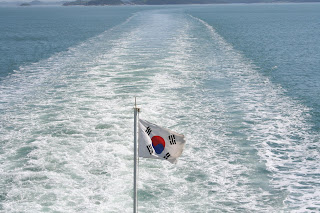 Leaving the mainland behind.
The ferry was nice, we spent most of our time walking round the boat and enjoying the views, there are lots and lots of little islands offshore from Mokpo so we had plenty to look at. The ferry was supposed to have an internet cafe but it seemed to have been replaced by a room of massage chairs which were actually really good apart from the bits which crushed your legs.
We arrived in Jeju-si (the main city on Jeju island) at about 2pm and found out that the ferry port is quite a way from the bus terminal and to get to Seogwipo on the other side of the island where we were planning on staying was going to take three buses and a looong time, so we got yet another terrifying Korean taxi ride - a very Korean way to start the next leg of our journey!
Posted by Rowan at 22:56