A few weeks back some friends we'd met and the GEPIK orientation told us about the Daejeon rock festival, apparently it would be a one night mini rock festival with 14 bands from around Korea, international food and beer and free entry! Having missed our usual summer dose of festival action in the UK (we normal work as festival stewards through the summer in the UK) we were very keen to go and check it out. So we hopped on the express bus from Gwangju to Daejeon its was a pretty quick journey at about 1 hour 40 minutes and we arrived at Daejeon bus terminal around 4:30pm looking forward to checking out the music and also the international beers.

We booked into a cheap motel near the bus terminal, one of the cheapest we've experienced;yet at only 20 000 won a night but it was nice enough, we've certainly stayed in worse places for 2 or 3 times the price. 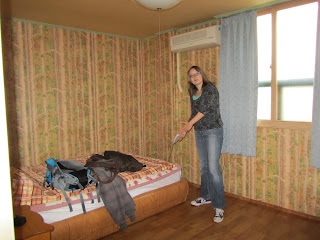 Sophie checking out the facilities in our luxury 20 000 won room.

After dropping off our stuff we took a stroll into town just looking around and trying to work out where the festival was, after a little while of not seeing much but big roads and realising we had no idea at all which way it was to the festival we hailed a taxi to take us there.

We arrived at the festival site some time just before dark and found it was right next the the Daejeon balloon festival which was going on in the daytime, unfortunately we missed the balloons but there were still lots of airborne antics going on including a crane based hanglider wizzing round, a remote control blimp flying around and people flying past on fan powered parachute things. 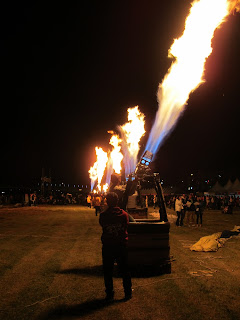 The hot air balloons were on the ground by the time we arrived but the burners were still putting on a fiery display from the ground. 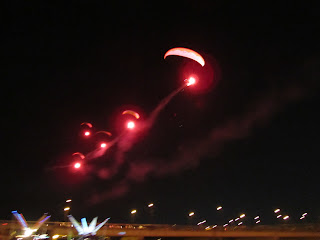 You can't see it very clearly from the photo but these were guys in parachutes with flares on their legs. 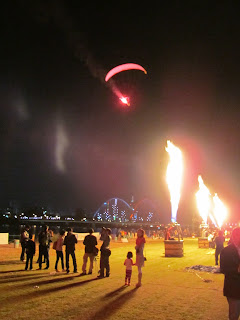 They came flying over the hot air balloon burners at a perilously low high, I'm surprised they didn't burn their toes. 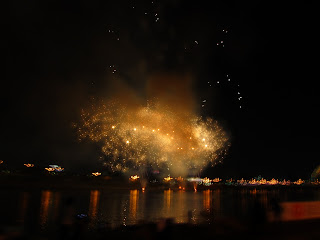 There was a beautiful firework display over the river at the end of the show. 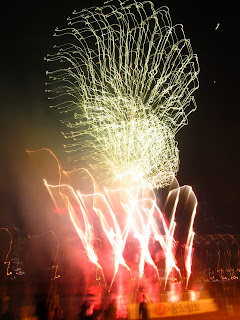 The fireworks were beautiful, unfortunately I had the camera on the wrong settings so they came out very blurred, still some of them created some interesting effects.
One of the main reasons we were interested in the Daejeon rock festival was because of the promise of international beer and food. The website promised 300 vendors selling international food beer and wines, so we rocked up eager to taste the foreign beer, unfortunately as often seems to be the case in Korea the enthusiasm of the advertising was not lived up to by the reality. Instead of the promised 300 stalls, there was one beer stall selling mostly a Korean domestic beer, they also had a choice of Hoegaarden, San Miguel, Heinekken or Guiness for about £5 a bottle, not quite the international quality beer selection we were hoping for! 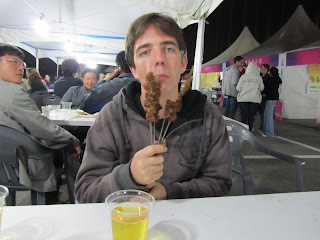 While the beer and food selection wasn't great, there was a Chinese lamb kebab stall which was bloody delicious, so delicious we went there three times in the night.
The food and drink situation might not have been all we'd hoped but the bands were pretty cool, a good mix of styles and all with plenty of energy. Although I was a bit confused by on band whose drummer took a call on his mobile and dashed off stage mid-song! 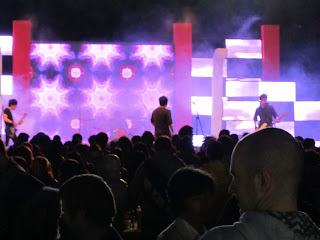 The crowd and the main stage. 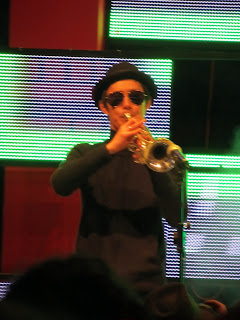 Our favourite band of the night had to be Ska Sucks! a Korean ska band with brilliant energy and stage presence. It was great hearing Koreans doing something other than K-pop.
The festival had been planned to run unitl 5am but around midnight, the police decided that it was too loud or didn't have the right permits or something like that and it had to be closed down. The shut down was a bit chaotic, we couldn't hear the annoucement from the stage but through word of mouth travelling through the crowd it seemed that they had been told they had to stop and the music would continue at local bars, but no one knew which ones. So went it all when quiet we ended up getting talking to a group of locals who were going to a bar called Yellow taxi. We followed them there and drank some more, once we were so drunk I could hardly see properly we decided it was about time to get some sleep so we eventually managed to direct a taxi back to our motel and passed out for the night. We had the mother of all hangovers the next day but luckily it was a short stumble across the road to the bus terminal on back onto  the bus to Gwangju. All in all it was a good night out and we had fun, they could do with sorting out some more internetional beer for next year though.
Posted by Rowan at 22:53