So, onto part two of our adventures in Tokyo (click here for the first part). On our second day in Japan we foolishly slept in late despite having had an early night the night before.. When we finally made it outside it was seriously hot! We kicked off the day by visiting nearby Ueno Park which was very pretty and home to some giant crows and a shrine as well as several museums although we didn't have time to look round them. We went to Ueno a lot as that was where our nearest major rail station was located and we were using Japan Rail passes to get around, both in Tokyo and for our only big journey, a return trip to Kyoto. 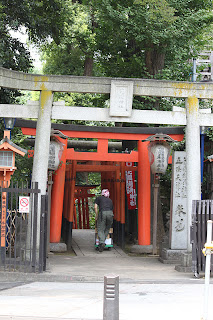 Ueno Park hosts 3 major museums including the National Science museum, a concert hall, several shrines and Ueno Zoo. Unfortunately, we somehow missed most of those things and only made it to one of the shrines. I think this is the entrance to the Ueno Tōshō-gū shrine.
Read more »
Posted by Sophie at 00:06 No comments:

Finally, a post about our summer vacation in Japan! I can't believe we're so far behind with the blog - I'm suitably ashamed!

So - Japan: take two. Well, we went to Japan for 5 days in September 2010 for Chuseok (Korea's harvest festival-type holiday) and we fell in love with it!. That time we went to the most southerly Japanese mainland island, Kyushu, and visited various places there including Fukuoka, Nagasaki, Beppu and the active volcano Mount Aso. We discovered that the food was delicious and made with passion, the countryside was beautiful and the Japanese people were friendly and helpful - even the driving was careful and polite, a nice change from the standards on the roads here in Korea. We'd vowed that we would return as soon as we could to see more of this strange and beautiful land and to take in the craziness that is Tokyo. 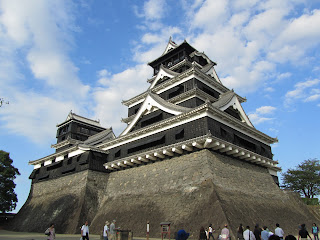 The beautiful wooden castle at Kumamoto. One of the places we visited on our first trip to Japan back in 2010.
Read more »
Posted by Sophie at 01:30 1 comment: