Kimchi, the taste (and smell) of Korea

aOne of the first things I notice when traveling to a different country are the different smells in the air. In Dubrovnik, Croatia the air is fresh and smells of the sea, in Marrakesh, Morocco the air is a heady mix of mint tea, spices, and the stink of tanneries but in Korea one smell stands out above all the others. Permeating everything three times a day is the unique garlicy odor of Korea's ubiquitous kimchi. 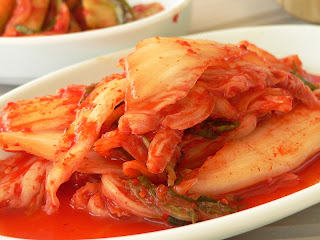 A plate of cabbage kimchi (from wikipedia, not taken by me)

Koreans LOVE kimchi, I mean really love it. If they had a choice between eating only kimchi or eating everything else in the world except kimchi for the rest of their lives I suspect most of them would choose kimchi. But most people in the UK have never heard of kimchi let alone tried it, so what is it?

Kimchi or 김치 in Hangul is a mixture of fermented vegetables, (usually cabbage but sometimes radish, cucumber, or spring onions) with salt, chilli paste, garlic and fish sauce.

The main smell of kimchi is the smell of garlic and fermented cabbage and it's this smell which fills the air three times a day. The Koreans eat kimchi for breakfast, lunch and dinner. Kimchi really is at the heart of Korean life, not only is it eaten with almost every meal, it has been taken into space with the first Korean astronaut, there is a kimchi field museum, it has been at the centre of a Japanese-Korean trade dispute, and it has featured in a verse from Korea's premier English hiphop group- the EV-boys

Koreans even have a special fridge dedicated just to kimchi (no really they do!) I'm not sure if its because they have so much of it, because it needs special storage or just because it would make everything else in the fridge stink of kimchi, but you can get dedicated kimchi fridges in Korea and most Koreans have one.

For the record I think kimchi is pretty good even though it smells bad, but given the kimchi or all the other food in the world choice I wouldn't be restricting myself to just kimchi.
Posted by Rowan at 10:46