My first day at school

We had to get up at 7am - much earlier than I am used to getting up for work! Our working hours are 8.30am - 4.30pm here. Both Rowan and I were picked up from our apartment by our co-teachers and driven to school which was great as we didn't need the stress of getting lost on our first day.
My first day started with a bang. I met the Principal and the Vice Principal who were both very nice. There was lots of bowing and shaking hands and I gave them my gifts - we had been told it was a good idea to get in their good books from the get go. My Principal and VP are both men and the VP seems to speak quite a bit of English but the Principal spoke only a little. Then I got to briefly see my staffroom up on the 5th floor and the main staffroom on the 2nd floor where my main Korean handler sits before being whisked back outside the school where I was told I would be addressing the entire school on the PA system and introducing myself which was a bit daunting at 8.40am! Apparently the school was having a special disciplinary meeting where all the students had to line up in the playground and the PE teacher with his massive stick (corporal punishment is still practised to some extent in Korean schools although it is technically illegal now) seemed to be giving their names to the Principal. It was to these lines of students that I gave my English address on the microphone. I was fairly confused about all this but it seemed to go ok.
I then had to teach my first lesson, straight away, 1st period. I had hoped to be observing a few classes before I started teaching as I haven't taught before but this clearly wasn't to be! Luckily, our friend Dean had given us a basic intro lesson plan we could use so I spent my first few classes that day introducing myself and getting the students to introduce themselves and then letting them ask me some questions. Some of the most popular questions they asked me were 'Do you have a boyfriend?' 'Do you have a baby?', 'Who is your favorite singer?' and of course 'Do you like kimchi?'. They also asked me my height quite a bit and when I told them they always seemed very impressed - teachaa very tall! Anyway, the first few classes I taught in my first week were pretty hard work and it's been a steep learning curve - that first day of teaching was mental but I think I learnt a lot (I hope!). 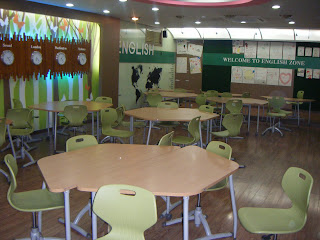 I have been automatically signed up for school dinners as I think most new Native English Teachers are. The lunch was interesting, not like school dinners back home. First of all you get metal chopsticks and a spoon not a knife and fork. You also get a metal tray with 5 round bowls punched into it, 2 large and 3 small for your food. On the first day I got kimchi and rice (you seem to get that every day), some kind of soup, a slice of watermelon, some kind of tofu and green beans dish and whole dried anchovies (at first I thought they were beansprouts but the tiny eyes gave them away) all of which I had to eat with chopsticks and a spoon!
I had one class in the afternoon and then I was taken to the main staffroom to attend a staff meeting which was all in Korean so it meant nothing to me. I had to introduce myself to all the teachers at the beginning of the meeting then I just sat there trying not to fall asleep and scoffing more watermelon.

I finally caught the bus home with one of my co-teachers at 5pm feeling exhausted but having had an exciting if slightly bizarre day. I was keen to ask Rowan how his first day had gone and whether his school had thrown him straight into teaching like mine had. Imagine my surprise when I got home to find that Rowan had been to the school, been shown round and introduced to people and then been taken back home at 9.30am and told he had the rest of the day off! Just the first of many instances of Korean public school randomness.
Posted by Sophie at 16:31