So way back in the first half of September 2011, we were packing our bags once again to go on another quick overseas jaunt. It was the Chuseok vacation, Korea's Thanksgiving/Harvest festival style holiday and we had Monday - Wednesday off work. Koreans usually visit their relatives in their home-towns during this or ancestors nearby to visit we decided to take our 5 days of freedom and go explore another country. Last year we visited Japan for Chuseok, this year we decided it was time to go check out China, specifically Beijing.

As usual, all the prices for travel were hiked up for the festive season and plane and train tickets were sold out way in advance. Travelling during Chuseok is like travelling during Christmas back home and can be a real nightmare if you don't plan it well. But as this was our second year of Chuseok madness we knew what to expect.

The two faces of the Korean Chuseok holiday - 1. Songpyeon. They are rice cake dumplings filled with honey or beans and steamed with pine needles to add a nice scent that are traditionally eaten during Chuseok. (photo from http://parsonsesl3.wordpress.com/) 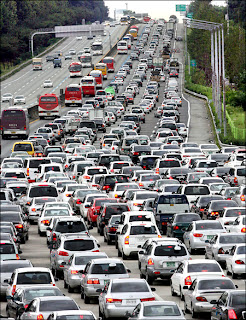 Before we could even consider going to Beijing we had to sort out the tricky business of getting a Chinese visa while living in South Korea. The Chinese Government have made it very complicated for ex-pats living in Korea to get a Chinese visa at the moment (not sure why). We had to go to China while we still had 6 months left on our Korean Alien Registration Cards otherwise we would not be issued with a visa. I really have no idea what the reasoning is behind this but I do know that it's prevented a lot of people from visiting China. Visas for Americans have also been made hideously expensive too (couldn't imagine why!) but thankfully, being British, our ones weren't too bad. I just applied for our visas using the same tourist agency that booked our flights.

As usual we stayed overnight at our favourite love motel on Incheon airport island, the Orange Motel, so we'd be well placed for an early start the next morning. We arrived in Beijing on a rainy Saturday morning and made our way buy bus and subway to our hostel, 1 Hai Inn (or the Candy Inn - dunno why it has 2 names - greedy!) which was nicely located in one of the old hutongs (traditional narrow street or alleyway) near to the Yonghegong Lama Temple.

The hostel was nice enough and built in a traditional design, with the rooms arranged around a central courtyard, just like the other old houses in central Beijing. The best thing about it was that it was in a hutong, one of Beijing's traditional neighbourhoods where you can still see people riding bicycles, playing Chinese chess on the street under the shade of an ancient tree and sitting on their front step relaxing and chatting to their neighbours. It's a great place to get a feel for the Beijing of bygone years. Now though, many of these neighbourhoods are disappearing as Beijing modernises. 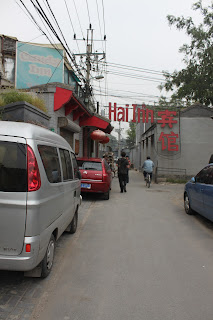 Our hostel was located down a tiny alley (hutong) in one of Beijing's traditional neighbourhoods. 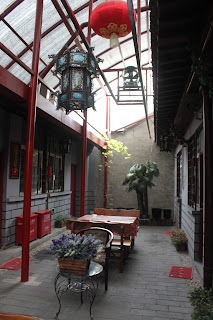 All the rooms in the hostel were arranged around a central courtyard which is the traditional style for houses in Beijing. 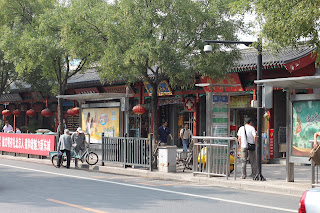 The main street that our hostel was located off of was a colourful and busy. As it was so close to the Yonghegong Lama Temple there were lots of tiny old shops strung with red paper lanterns selling incense and wooden beads to passing worshippers. 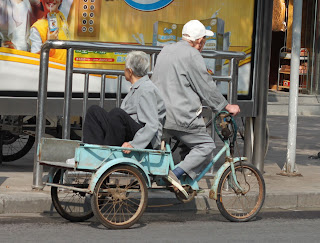 Modes of transport in Beijing were as varied as the country's cuisine. This is oyur basic bicycle trailer. 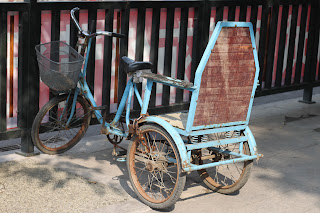 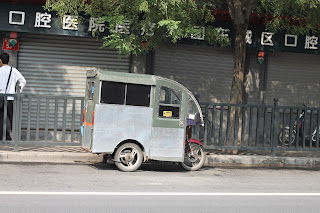 How about something with a little more power and protection from the weather? 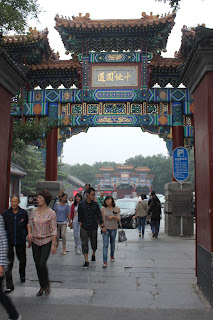 Entrance gate to one of the many pretty old fashioned streets in the area near our hostel. In the background you can see the entrance gates to the Yonghegong Lama Temple, one of the largest Tibetan Buddhist temples in the world. 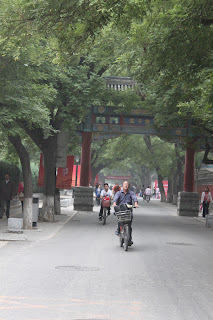 Pretty traditional street near our hostel. 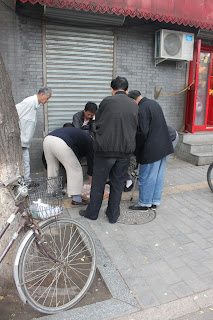 Men gathered round watching a game of Chinese chess in a hutong near our hostel. 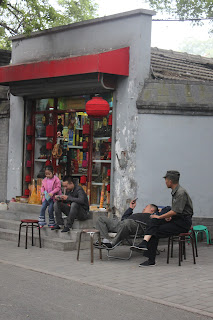 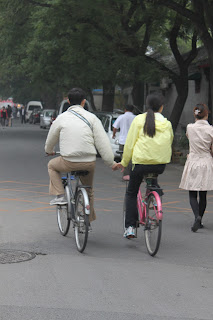 Couple holding hands while riding their bikes through the old Beijing neighbourhoods.


We spent the first day wandering around the local area trying to get our bearings but the rain was putting a bit of a dampener on things. After an abortive attempt to visit the Police Museum (it was just closing) we ended up taking shelter form the elements at a nice, if rather trendy, bar called the Vineyard Cafe. Rowan was very happy about this as they had a great selection of beers form all around the world, something that is sorely lacking in Korea for the most part. Funny that we have to go to ostensibly Communist countries to get our international food and drinks kicks! 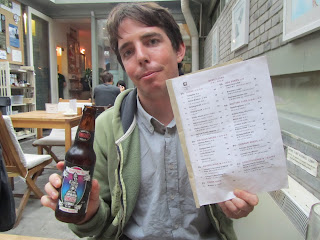 Rowan posing with his American 'Dead Guy' ale in the Vineyard.

We had a few drinks and a bite to eat in the Vineyard and planned what we would do next. As the weather was still pretty dire and we were tired we decided to get an early night so we could pack loads in on our first full day in Beijing.

Watch this space for the next Beijing post - it will include more weird  traditional musical instruments than I could ever possibly resist, sightseeing in Tiannamen Square and excited Chinese tourists wanting to have their picture taken with me!
Posted by Sophie at 14:07