We made an early start on our first full day in Beijing. The weather was vastly improved, warm and sunny an our plan was to do some serious sightseeing! We jumped on the subway and travelled to East Beijing for our first stop of the day, Panjiayuan Antiques Market. This popular flea market, also known as 'Dirt Market' apparently, has been going strong since 1992 and receives thousands of visitors every day, both locals and tourists. It's the place to go if you're looking for souvenirs and there are even some genuine antiques mixed in with the fakes and reproductions too! 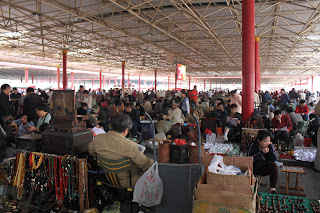 Panjiayuan Antiques Market on a busy Sunday morning.
The market was huge and comprised of several indoor and outdoor sections divided into stalls and more permanent looking shops. The shops seemed to have more fixed prices but you needed to barter at the stalls for a decent price - luckily I had Rowan with me to do that as bartering is not my strong point! I'm more likely to end up offering the vendor more money out of embarrassment than getting a discount! There were all kinds of objects on sale, from tiny teapots, 'ancient hand-painted' scrolls, jade jewellery, porcelain busts of Chairman Mao and beautifully painted vases to backpacks, embroidery and stuffed animals. I could easily have spent all day there poking through all the stalls but we were on a tight schedule so just kept it to 3 hours! 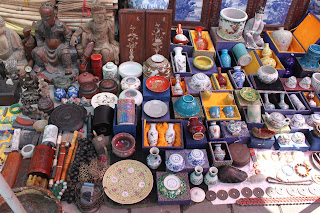 One of the many stalls selling a variety of miniature vases and teapots, highly decorative plates, chopstick holders and ornaments. 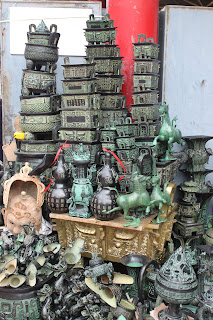 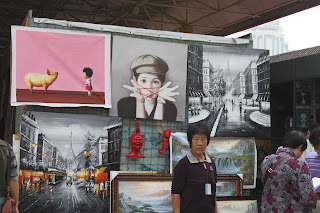 Original artwork was also on sale. 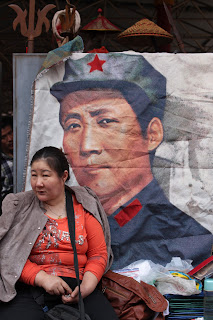 A local woman sat in front of a Communist rug. 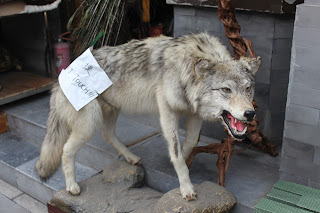 One of the fixed price shops at the side of the market specialised in taxidermy and was stuffed full of unfortunate beasts. 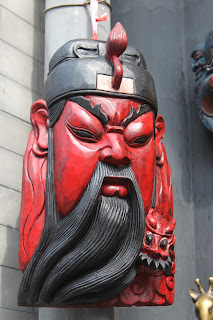 Traditional mask hanging in front of one of the market shops. 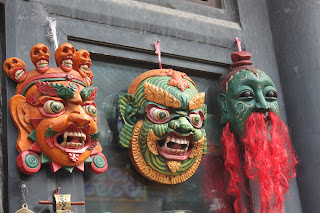 Some more super cool masks. I particularly like the one on the left with the four skulls on top. 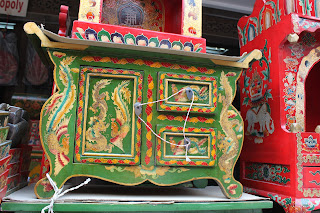 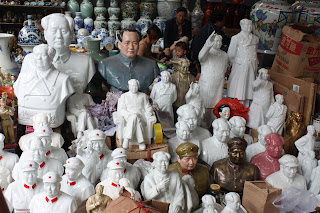 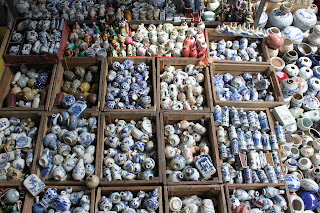 More tiny vases and teapots. I really like these things but they were cheap reproductions clearly mass printed not painted. Still pretty cute though. 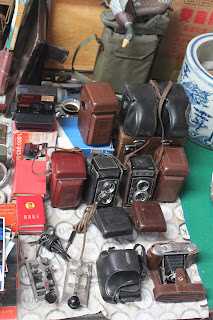 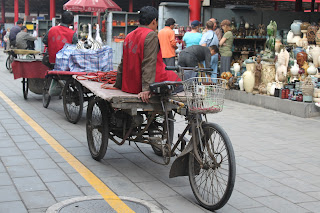 Market workers relaxing on their trusty steeds at the edge of the market.


Of course, all this porcelain and furniture was nice enough but what I was really interested in seeing were weird and wonderful musical instruments. I wasn't disappointed! There were flutes, pipes, clay bird whistles, the lot! Also, I discovered a new and beautiful instrument from Yunnan Province in Southern China called a hulusi - and bought one, naturally. I also bought a wooden flute and a ceramic flute called a Xun. 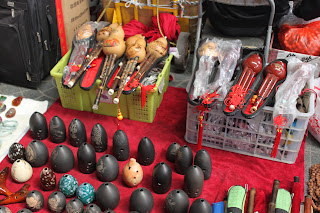 In the foreground of the picture you can see several Xun, Chinese pottery flute made from clay or ceramics. They are one of China's oldest instruments with a history going back 7000 years. The instruments at the back are all hulusi, Chinese gourd instruments. 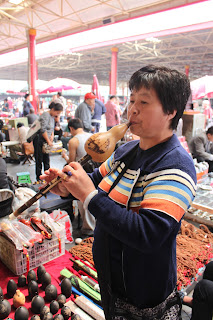 This friendly stall-holder gamely played her various instruments for potential customers. I was instantly hooked! The hulusi is a reed wind instrument made of a gourd with 3 bamboo pipes, 2 of which are drones. It has a very pure and beautiful sound - provided you can play it well of course! 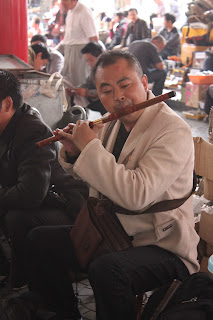 Another friendly and talented vendor enthusiastically played a variety of different flutes to tempt us. Again, I was easy prey! 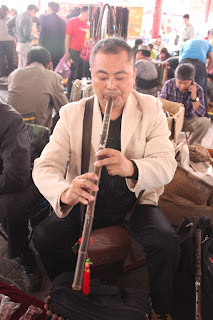 The flutes he played kept getting bigger and bigger and more expensive until he ended up pulling out this bad boy!

Eventually, Rowan managed to drag me away from the market, with considerably lighter wallets than before we arrived but weighed down with exciting new musical instruments instead. As we left the market we saw some new exciting forms of Beijing transport to add to the memory banks. 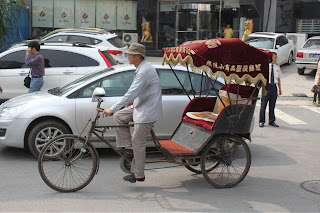 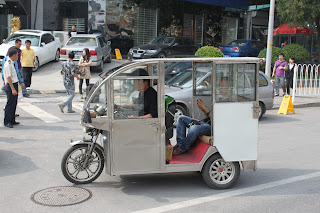 How about a motorcycle taxi with rain protection built in? 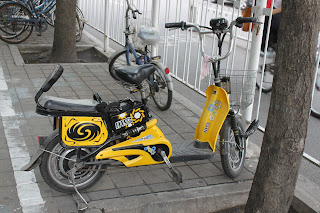 Electric bicycle or low power scooter? Not sure.

Our next destination was Tiananmen Square in central Beijing, famed for its monolithic size and the bloody protests that took place there in 1989 which resulted in the deaths of hundreds or maybe even thousands of civilians and many more injuries.

We had a brief look around the edges of the square and were struck by how much security there was in the area. There were a lot of uniformed police around and to get into the square proper you had to use one of several underpasses. Each underpass had security checkpoints and X-ray machines that you had to pass your bags through every time you went by. There were a lot of metal crowd control barriers both in the square and in the wide streets surrounding it and CCTV cameras everywhere. Not a place where you could relax really but still very interesting and absolutely massive in scale. 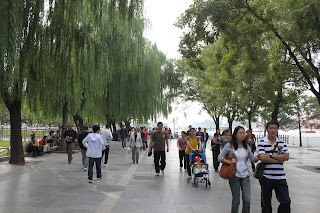 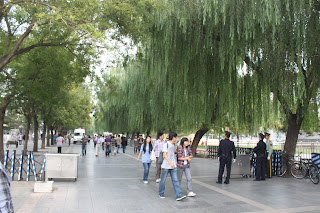 Uniformed police and army stationed next to movable barriers on the same leafy boulevard. There were also several army guys standing up on small platforms dotted around the area. The uniformed guards didn't actually look that intimidating, the aim of the uniformed security services in China doesn't seem to be to intimidate. They leave that to the plain clothes thugs that could be anywhere and everywhere. 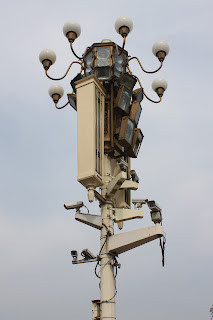 Street light covered in cameras watching the crowds in the square. 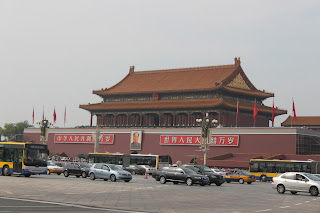 View of Chairman Mao's Mausoleum where his preserved body still lies in state. This was just across form Tiananmen Square. 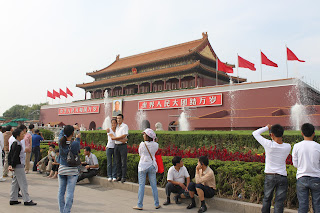 This was a very popular spot to have your picture taken, preferably in a crazy pose. 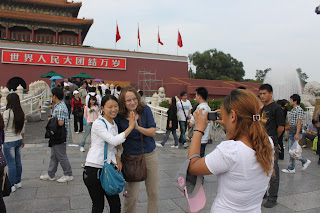 Even better than a crazy pose, get your picture taken with a Westerner! These 2 Chinese girls wanted their photo taken with me for some reason! 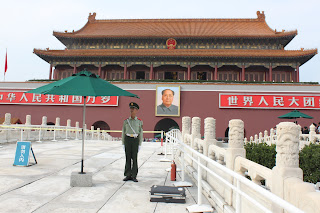 A very serious looking guard standing in front of the Mausoleum. 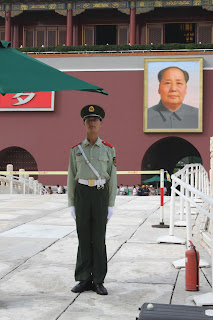 Close up with Mao's portrait.

As we were right in front of the Forbidden City, we decided that we might as well go in and see what all the fuss was about. However, as this post is already pretty long I'll save that for the next post. So....watch this space for the next post which will of course cover the Forbidden City, the flag lowering ceremony in Tiananmen Square and the inevitable visit to the exotic food market for some delicious crunchy insects.
Posted by Sophie at 14:14