Doctor who guess who

I've not been enjoying my summer camp that much so far, but today has been really good fun. Why? Because today we played doctor who guess who!

I want to share the game with you because we had a lot of fun playing it and I think it could be a good bit of fun for doctor who fans or a resource for teaching descriptions.

I started the lesson by showing some pictures of people and getting the kids to practice describing them to me, I used the Spice Girls and Westlife because the Spice Girls had a variety of different hair colours and styles and Westlife because kids over here have heard of them. Then I showed them a powerpoint of the various aliens and got them to describe them. Finally I showed the rules for guess who presentation. I know its a hell of a lot of powerpoints but I put some nice animation in them to try to stop them from being too boring and there was lots of interaction with the class throughout.

The game works just like normal guess who except I laminated the sheet of faces and got them to cross them out with a marker instead of flipping the tiles down like the original game. If you don't have access to a laminator you could stick them on a guess who set or just cover them with post it notes or do something else, I'm sure you'll think of something! 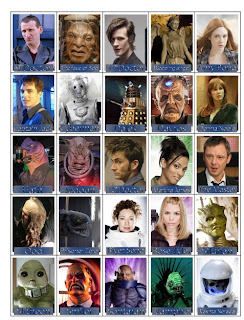 Doctor Who Guess Who game card

If you want to play the game yourself you'll need the files below, obviously if you're not a teacher and just want to play at home you won't need the powerpoints!

Credit must go to eatyourkimchi for some of the templates, I had the idea independently but I found their version and used it as a base for some of my stuff.
Posted by Rowan at 12:38