A quick interruption to the holiday reports for a Typhoon report! We were woken up at about 6 yesterday morning by banging rattling and crashing as rain poured into the apartment and everything was getting blown around by Typhoon Kompasu coming in through all the windows I'd left open, doh! We'd been expecting it to hit for a few days but somehow it didn't properly register that it would be a good idea to shut the windows. One of the other English teachers in Gwangju decided to climb up onto the roof of our apartment building to enjoy the full force of the storm at 6 am, he's lucky he didn't get blown off the building. Typoon Kompasu was apparently the biggest typhoon to hit Seoul in 15 years. 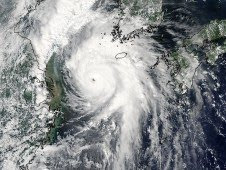 Satellite image of Kompasu just off the south coast of Korea (the land mass at the top of the image). 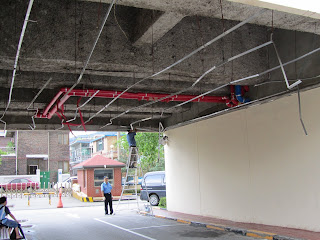 This tunnel under our apartment used to have a metal roof attached. 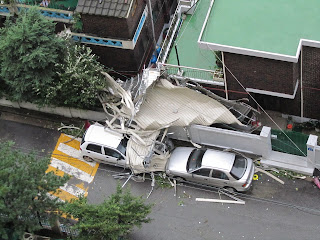 The roof ended up on the other side of the street. 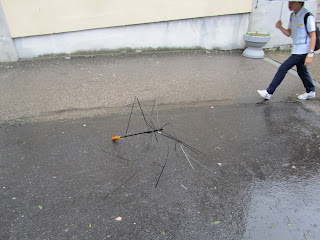 Umbrellas weren't much use against this storm! 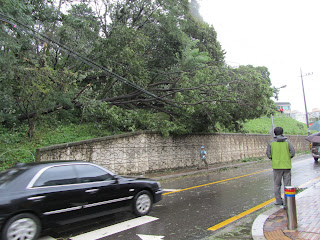 Plenty of trees fell down, this one was on my way to school but fortunately didn't do much damage. 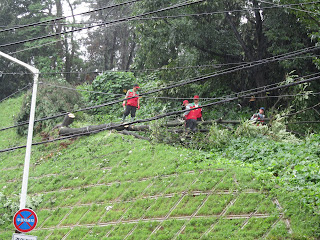 The Koreans didn't waste much time in starting the clear up, these guys were out cutting up fallen trees about 2 hours after the strongest winds had died down. 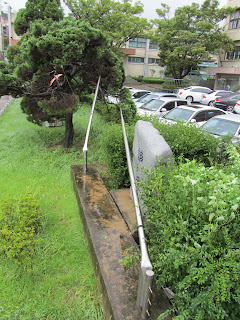 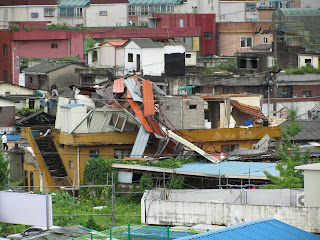 Some poor sod's roof top shack got completely wiped out. 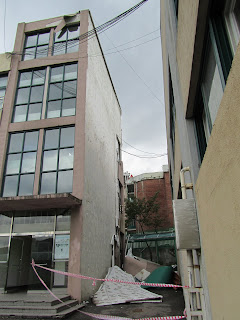 It seems that most of my school is clad in polystyrene sheets covered by some kind of outdoor wall paper stuff, unsurprisingly it didn't stand up to a typhoon very well. 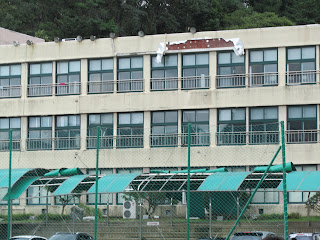 The rain shelter for spectators by the school sports field got pretty trashed.
Overall I think we were pretty lucky, all we suffered was a slightly wet apartment, three unfortunate people were killed by falling debris so we got off lightly. The storm did have some plus sides, I was just getting ready to go to school when I got a call saying school wasn't starting until 10:30 so I could stay home until then. Sophie wasn't so lucky, she had to come in for 8:30 as usual even though the start of classes was delayed til 10:30. The most annoying thing for me was the power at school going off just before the start of my second lesson, being a highly organised teacher I hadn't printed any of my worksheets for the lesson, now I couldn't, nor could I show the powerpoint slideshow I'd prepared. I had to come up with some whiteboard games and other preparation free exercises pretty quick, I just about managed to wing it though.
Posted by Rowan at 11:15