We woke up on the last full day of our Japan vacation feeling very tired thanks to some drunk Americans who had woken us up at 4am shouting and banging about in the corridor outside their (and our) rooms. In fact, they were so loud that I'd assumed that it was 7 or 8am and it was time to get up as surely nobody would be so selfish and inconsiderate as to make that much of a row in a hostel where they shared the facilities with other travellers from all over the world would they? So, we were not at all impressed and had a bit of a crap start to the day. Still, we dragged ourselves up and caught the 9.20am Sonic Express train to Beppu, a city on east coast of Kyushu island. Yet again, the weather was warm and sunny and we passed through some really pretty countryside on our train journey 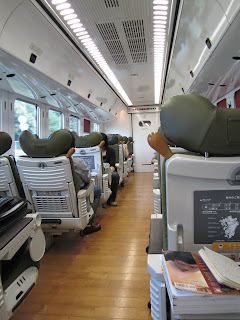 The Sonic Express was fast and smooth and really nice, with wooden floors and big comfy seats. 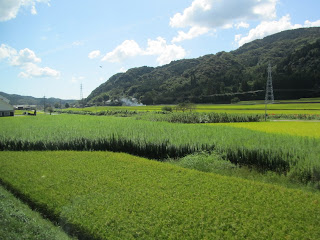 View of the Japanese countryside from the train window.
We pulled into Beppu around 11.20am and headed straight for tourist information to get some maps and a bus timetable. Beppu is a bit of a tourist town as it is known as Japan's onsen (hot spring) capital and according to Wikipedia " it has the second largest volume of hot water in the world after Yellowstone in the USA and has the largest number of hot spring sources in Japan". Beppu is literally drowning in hot springs so it is a good place to sample that favourite Japanese pastime the hot spring bath, hence the large numbers of tourists. Our first onsen experience was a public hand bath just outside the train station and the water was lovely and hot.
We decided to take a little side trip though before we explored Beppu's onsens. We had heard about a mountain near to Beppu called Takasakiyama that had a large population of Japanese macaque monkeys living on it so we attempted to go there. It should have been a 10 minute bus journey to get there. However, we must have caught the bus going in the wrong direction or something and what should have been a quick 10 min trip turned into over an hour long odyssey across 3 different buses and a lot of confusion! Never mind, it was worth it. I'd never seen monkeys living in the wild before so I was very excited about going to the monkey park. Takasakiyama (Mount Takasaki) is a forested mountain and home to more than 1500 wild Japanese monkeys. The monkeys are fed regularly by park wardens, apparently to keep them on the mountain and prevent conflicts with farmers and residents in the neighbourhood. We rode the monorail up through the gardens and found there were monkeys everywhere as we had arrived at feeding time. We had wondered if we would see any monkeys but we needn't have worried. They were climbing over everything and were busy grooming each other, playing and fighting. The fighting and screeching was a little unnerving actually. We got chatting to an American girl and as we were talking two scrapping monkeys came screaming past and one of them grabbed her leg. She shrieked and grabbed hold of me in terror which was embarrassing for her but pretty funny. I think if one of those monkeys had grabbed me I would have done the same thing - they looked cute and fluffy but their claws and teeth didn't and the older males were quite sizeable. Anyways, it was really interesting to see such a large group of monkeys interacting with each other and we got loads of nice photos of them too. 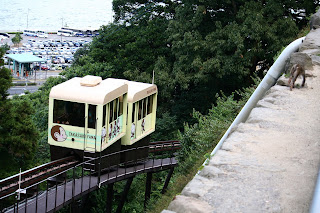 The monkey mountain monorail for lazy people like us that couldn't be bothered to walk. 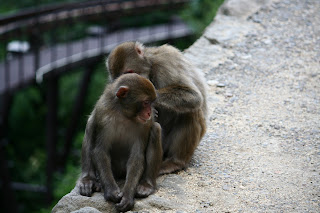 These were two of the first monkeys we saw. They spent ages just grooming each other, picking out the fleas and yep, eating them! 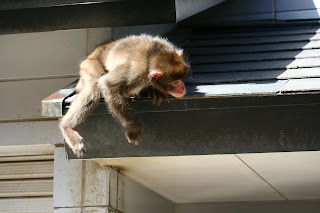 This monkey was down on his luck and ended up in the gutter. 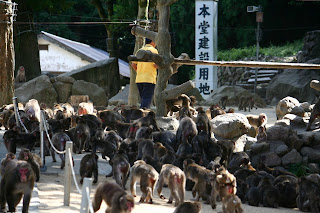 The guy in the yellow shirt is a staff member feeding the monkeys which is why they're all following him like the Pied Piper. 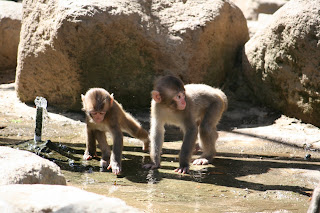 It was a pretty hot day so some of the monkeys were taking a bit of a dip. 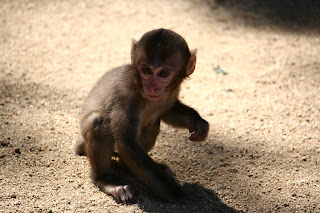 The cutest, cuddliest monkey baby ever - it would rip your face off given half a chance though! 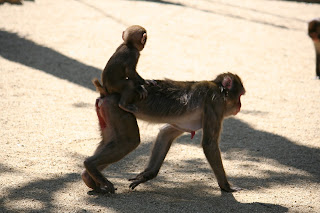 Mum's stuck doing the school run again. Life's not easy, even for monkeys. 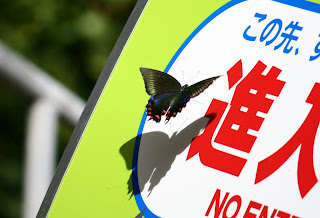 We finally got a shot of the giant black butterflies that we'd been seeing all round Korea this summer and here it is. This photo doesn't really show the scale of it but it was about the size of an outstretched adult hand i.e. pretty big! 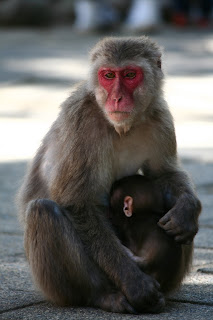 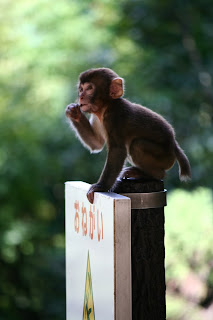 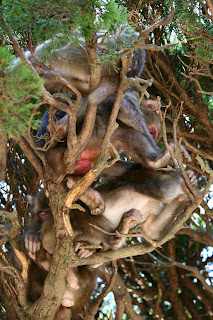 Monkey puzzle tree!
After hanging out with the monkeys for a bit we caught a bus back to Beppu, picked up some bakery food for lunch and caught another bus along the coast to a popular beach-side sandbath where the guidebook said the staff spoke good English. It turned out the staff didn't speak a word of English so it was very confusing! After a while we worked out with the help of a young Japanese customer that we had to wait 30 mins for a sandbath but in the meantime we could sit out the back dipping our feet in a very hot foot bath overlooking the sea which was very relaxing. When our time came we went off to our separate changing rooms, and got changed into some loose fitting robes and made our way outside onto the beach. We were buried in shallow sand trenches by a small army of women armed with shovels. The sand was heated by the hot springs and we had little wood blocks to rest our heads on. The experience was pleasant if a little odd. It was a relaxing lying there facing the sea and hearing the lapping of the tide but it was kind of creepy being buried alive! After 20 mins we were allowed to lift ourselves out of the sand and we went off to our separate changing rooms again where we had a shower to get all the sand off, dumped our robes into a laundry chute and then went for a soak in the hot bath with a load of other naked people! 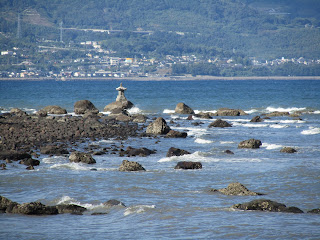 View of the coast from the beach behind the Sand Bath place. 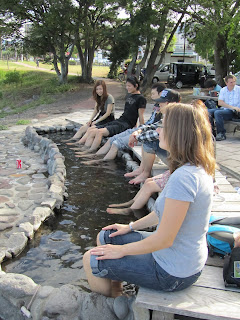 Hot foot bath on the beach. 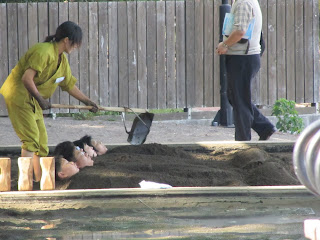 People getting buried in hot sand by ladies wielding shovels.
After getting dried off and dressed we got a bus up the hill to have a look at some of Beppu's nine 'hells' (geothermal hot spots). These were hot springs for looking at rather than bathing in and we saw two of them, a red one called Blood Hell and a blue one called Sea Hell. They were very steamy and they stank of sulphur, that eggy odour that we had already encountered at Mount Aso. They were boiling eggs in the Sea Hell though I can't imagine they tasted very nice given the smell wafting out of the spring! They both looked very impressive though. 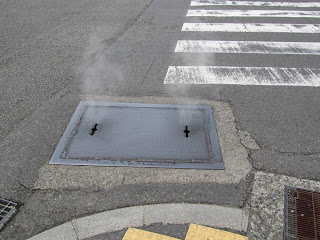 There were so many hot springs in Beppu that there was even steam rising up from under the streets. 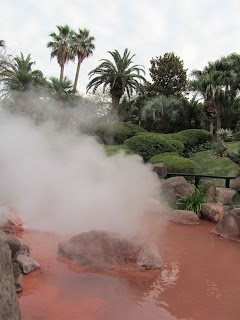 The Blood Hell is Japan's oldest hell and gets its colour from the red clay that it sits in. 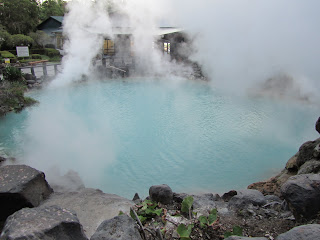 The cobalt blue pool of boiling water called the Sea Hell is apparently 200m deep and emerged about 1200 years ago after a volcanic eruption.
After looking round the hells it was getting dark so we headed back to the station and caught a train back to Fukuoka. As it was our last night in Japan and we loved the food there so much we decided to go on food mission to try and sample a few of Japan's specialities while we had the chance. The first thing on our list was tempura so we went to a little place called West which had been recommended in the guidebook. The tempura was pretty nice but it was more of a greasy spoon cafe than the bustling, steamy ramen joint that the guidebook had promised. After that we did some more wandering the streets in pursuit of somewhere to get some o-tore sashimi (raw fatty tuna belly) but we couldn't find anywhere that served that so we settled on a place that had some normal tuna ngiri and had a few pieces of that along with some sake. We expected the sake to come in a small glass so we were pretty surprised when they brought out a jug of it for us to enjoy! I'm sorry to say that we ended up abandoning a fair bit of it, there was just too much. We did a bit more wandering but by about 1am we were knackered (it had been a hell of a long day) and a bit lost so we grabbed a taxi back to the hostel. It wasn't cheap! That taxi ride cost a fortune compared to what you would pay here in Korea but it did have seat belts and the driver was listening to jazz so I suppose you get what you pay for! 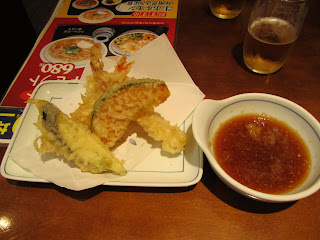 A plate of tasty tempura from West. 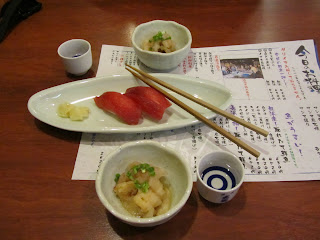 Rowan's tuna nigiri and some of the sake we managed to drink.
The next day we checked out of the hostel and the manager asked to take our photo for their website. We caught a bus to the ferry port, blew the last of our yen in duty free and bid a fond farewell to Japan. The weather was much better on the way out of Japan so the sea was a lot calmer though once we arrived in Korea the dark clouds pulled back over the sky and the sun had disappeared. The journey back to Gwangju was a lot easier than it had been going out. The traffic was non existent and we got back to Seongnam Bus Terminal in the record breaking time of 4 hours, exactly half the amount of time it had taken going the other way!
Overall, we had a great time in Japan and we both really want to go back and see more of it, though we'll have to save up our won as it's not a cheap place. Having said that, it wasn't as ridiculously expensive as we had feared and we got by quite happily on about 7000 yen a day not including train fares but including everything else even accommodation. It was really interesting experiencing a different Asian culture and noticing the similarities and differences between Japan and Korea. Next time we plan on going to Tokyo to experience the full on Japanese futuristic city madness and Kyoto for all the beautiful temples. Roll on the next holiday break!
Posted by Sophie at 20:43