Back in the chilly depths of mid February, Rowan and I attended our first Korean style wedding. The wedding was for our old university mate Dean who was marrying his long term Korean girlfriend, the lovely Choon Wha. The wedding took place on a cold Saturday afternoon in a rather grand wedding hall in Suwon, the provincial capital of Gyeonggi province (the province where we live).
We were a little bit nervous ourselves as Rowan and I had both been given special roles. Rowan was the best man and I was the MC. Being the best man didn't seem to involve much really although Rowan did have to make a last minute dash back to Choon Wha's apartment to get the all important wedding DVD showing pictures of  the young Dean and Choon Wha and telling the story of how they got together. He managed to make it back just in time and saved the day - good job! Dean didn't want a stag do so Rowan didn't have to sort any of that out.
My role was a bit more unusual. I was the English speaking MC and had a Korean counterpart who was unbelievably nervous at the responsibility that had been given to him. Our job was to stand at the side of the hall at the front and read out the directions and announcements for the order of service, me in English and my Korean counterpart in Korean of course. We had to use microphones so everyone could hear but that didn't worry me as I have to make an audio broadcast to the whole school every Thursday and Friday morning so I'm used to it. Weirdly, we were also made to wear these little white gloves which looked pretty funny. Dean and Choon Wha's parents had to wear them too. 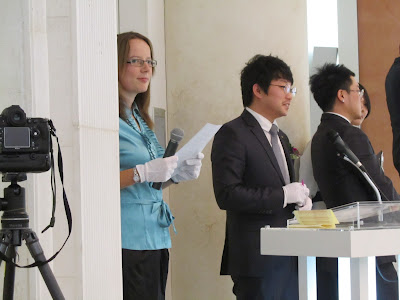 My Korean counterpart and I stand at the edge of the room with our microphones and little white gloves.
Talking of Choon Wha's parents, due to a heavy snowstorm in Gangwon province on the morning of the wedding, Choon Wha's father didn't make it in time for the wedding as he was coming from Samcheok on the East coast where they had extremely heavy snow that blocked the roads and stopped the transport networks. He finally staggered in the door of the local hof (a Korean bar where you have to buy food with your drinks) where we were having some post nuptial drinks at around 7 or 8pm  after having set off at about 5am that morning - poor guy. Choon Wha was understandably upset that her father wouldn't be able to give her away but at least her mother and brothers made it and I think she was given away by an uncle in the end. 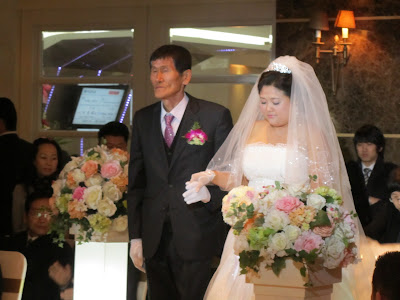 Choon Wha makes her entrance with her uncle after her father was unable to make it in time.
Weddings in Korea are a little different to weddings back home. Many modern Korean weddings are held in massive, purpose built wedding halls that often have several rooms and a large buffet hall so that guests from several weddings can eat at the same time after their ceremonies. Korean weddings  are usually quite short compared to Western ones and are usually more relaxed too. This was true for the wedding we attended. The wedding hall was large, luxurious and spread over several floors. Dean and Choon Wha's ceremony took place on the same floor as the buffet room which was handy! There was a room with a decorative throne in it where the bride and groom and their families had their pictures taken before the ceremony started. Then there was the main wedding hall where the ceremony took place, decorated with chandeliers, flowers and laid out with seating for the guests. The wedding hall also contained the novel Korean addition of the lit up runway that the bride walked down with her young assistants holding the trail of her dress at the beginning of the ceremony. Dean's wedding lasted longer than most Korean weddings do but it was still quite quick at around 30 minutes. 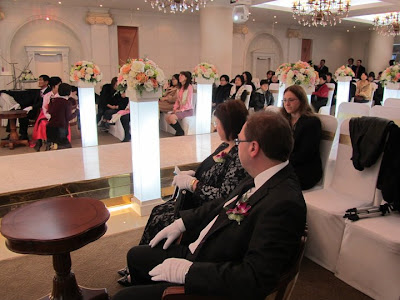 Seated guests looking at the lit up runway, waiting for the arrival of the bride and groom.
The ceremony began with the mothers of the bride and groom walking to the front to light a candle for the future of the marriage. Then, the groom entered first with the bride coming in after. They had to bow to everyone to show their respect and then go through the standard wedding vows. Then it was over to the 주례 (pronounced ju-ray) for a bit of speech making. At Korean weddings (well at this one at least), there wasn't a registry official or a priest or vicar (as it wasn't a religious ceremony). The 주례 officiates the ceremony and gives the couple advice on how to make a good marriage. The 주례 at this wedding was Choon wha's old lecturer from university. Apparently,  it's usual to have someone in a respected profession who knows one or both of the couple to act as 주례 at the wedding. She had pretty good English and repeated some parts of the speech again in English so us foreign folks could understand what was going on which was cool. 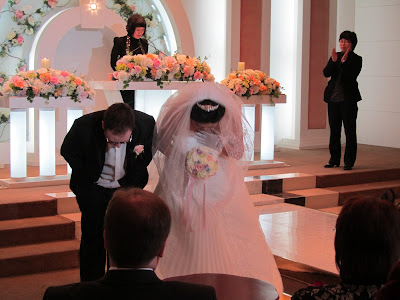 Dean and Choon Wha bow to Dean's parents to show their respect. 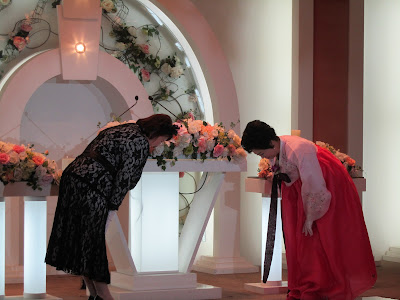 The two mothers bow to each other after lighting candles for the future of the marriage. 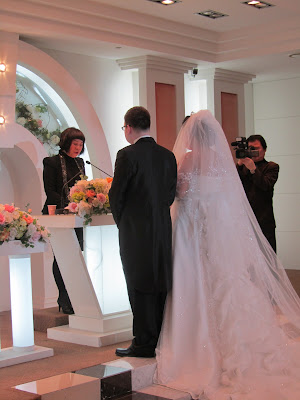 The 주례 gives Dean and Choon Wha some advice on how to make a good marriage.
Next was some music played on the ocarina by a couple of Choon Wha's friends. That was quite fun, I've never heard of ocarinas being played at a wedding before.  This was followed by a lot more bowing on Dean and Choon Wha's part, to their guests and their parents. Then they cut the cake. Weirdly, it was a plastic cake. The real cake came later. This is also a standard thing at Korean weddings apparently. Then, there was a short DVD presentation showing pictures of the Dean and Choon Wha when they were kids, some photos of when they got together and some pictures or a wedding photo-shoot that showed the couple in a variety of different outfits including Hanbok (traditional Korean costume), traditional Western wedding gear and an outfit that seemed to be mainly about wearing oversized glasses. Strangely, in Korea it seems to be more usual to do most of the formal wedding photos before the actual ceremony at a staged wedding shoot. In fact, Dean and Choon Wha were officially married before before the ceremony. The actual wedding ceremony is just for show but the legal aspects have all been done in advance. Doesn't leave much room for soap opera style drama of the "is there anybody here who knows of any reason why these two persons should not be married" variety - probably a good thing though! After the DVD, the bride and groom left to the sounds of the Wedding March, some more photos were taken and then everyone hurried to the main attraction - the buffet! 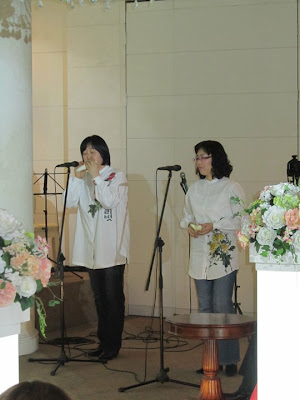 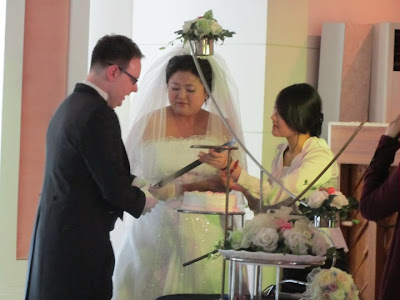 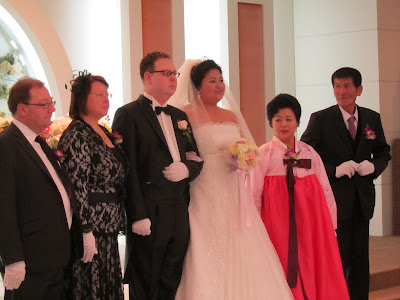 Family wedding photo taken at the end of the ceremony.
It was a large Korean/Western style buffet with all the usual rice, kimchi and seafood dishes and some random sandwiches and soups. The cakes were really nice and there was booze! Dean came out wearing hanbok at some point which was quite amusing - I think it suits him! As with Western weddings, I think the buffet is one of the main expenses. In Korea, if you are a guest at a wedding you are expected to give the couple cash as a wedding gift, the idea being that the cash will help to pay for the ceremony/buffet. It may seem a little unromantic I suppose but it is undoubtedly practical. 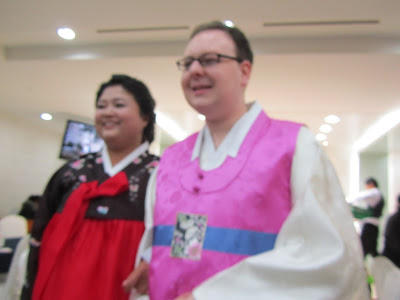 Dean and Choon Wha in their traditional hanbok. Bit of an unfocused pic unfortunately but that's what you get when you let Rowan take the photos! (Only joking!)
After the buffet, Dean, Choon Wha, their families and some of us randoms went to a local hof in Suwon for a few drinks to celebrate. Rowan had made them a 3 tier wedding cake which was opened and devoured in lightning quick time at the hof. The top layer was fruit cake, the 2nd layer was lemon cake and the bottom layer was Madeira. He fully iced it with royal icing that he had to go to a market in Seoul specially for (baking supplies are hard to find in Korea as it is a land that traditionally doesn't have ovens). It was a delicious cake but I became jealous of it as Rowan seemed to spend more time with it than he did with me while he was making it! 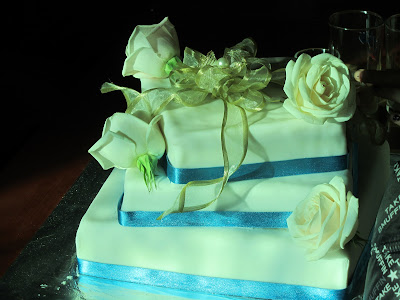 Rowan's mistress - the 3 tier wedding cake he made for the wedding!
It was a happy occasion of course but also a bit of a sad one as we knew it would be the last time we would see Dean and Choon Hwa for a while as they were leaving for Jeju island soon after the wedding to start a new life as the proprietors of their own guest house - yes, Dean is now the new Basil Fawlty of Korea - it had to happen one day!. They are now running a guest-house in Moseulpo, Jeju and are already taking a lot of bookings.  If you're interested in somewhere to stay on Jeju, or just want to track Dean down for your own dark and mysterious motives, check out the guest house's Facebook page here.
Posted by Sophie at 12:34