Back in the middle of March, we travelled with a few other Gwangju waygookin (foreigners) down to Jeolla Province in the south western corner of Korea to play at being Moses for the day at the annual Jindo Sea Parting Festival. Jindo is the third largest island in South Korea and is connected to the mainland by South Korea's longest suspension bridge, measuring an impressive 484 metres according to Wikipedia. It is also home to Korea's most (only) famous breed of dog, the Jindo, a medium sized hunting dog.

The Jindo Dog is designated Korean Natural Treasure number 53. It never ceases to amuse me how Korea categorises and numbers its various cultural, natural and national treasures - virtually every temple, monument and statue has a plaque stating its place in the heritage pecking order.

Jindo Dogs are very cute and fluffy and you see them all over Korea. Unfortunately though, they're often used as guard dogs and not kept in the best of conditions, chained up so that they can't move around very much.
Once a year, thousands of people descend on this quiet, rural island to witness the mysterious parting of the waves that opens up a 2.9 km land pass through the sea from Jindo island to a nearby small island called Modo. Apparently, this phenomenon is caused by "tide-related sea level variations" (good ole Wikipedia again - must be the truth!) and the road can reach up to 40 metres in width. Usually, the Jindo Sea Parting Festival takes place at the same time but it was officially cancelled this year due to the Foot and Mouth outbreak in Korea. The Korean Government actually cancelled a lot of local festivals this year as they didn't want people spreading the infection any further. However, like us, many people weren't put off and went to Jindo for the sea parting anyway, lack of festival notwithstanding.
We set off from Gwangju on the Friday evening as Jindo is pretty much the other end of the country from where there. We took a taxi to the bus station in Yatap in order to make it to the express bus in time. The first bit of excitement came when our taxi driver nearly crashed us into some bollards in the middle of the road as we pulled up at the bus station. I think his mind wandered as he started to watch the in-car television on his dashboard rather than where he was going, a common problem for cabbies here. Can't blame him though really, Korean game shows are pretty crazy, if I had a TV in my car I'd rather watch that than some boring strip of concrete. Luckily for us, we were going very slowly at this point  and he just managed to brake in time,  leaving the orange bollard standing smack centre in the middle of the bonnet less than an inch away from impact. Good entrance.

Is driving at 120km an hour while not wearing a seat belt, not using your mirrors and talking on your cellphone not exciting enough.? Why don't you buy an in-car dashboard mounted TV to keep you entertained!
We caught the express bus down to delightful Mokpo and camped out there for the night as it was the closest sizeable city to Jindo. One of our group had made a booking at a local love motel for two large rooms for us all to sleep in and the payment had been made. Unfortunately, the motel guy had a different idea about what we'd booked. Cue an hour of back and forth with the guy in broken Korean to try to work out what the hell was going on followed by an eventual compromise and a slight hike in the price. Being a boring old bastard I wasn't really into the idea of sharing a 2 bed room with 5 other people anyway so Rowan and I just grabbed a double room for ourselves. They're so cheap here anyway I don't really see the point in sleeping on the floor to save 5 quid. After all that excitement, we went to a local hof (Korean bar) for a few drinks. As usual Rowan managed to make some Korean man friends (he seems to attract Korean guys to him like Goths to a cemetery). 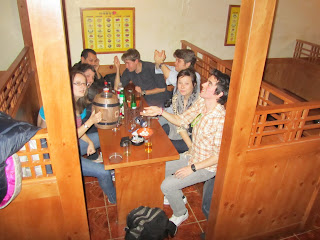 In our booth at the hof in Mokpo. They served Korean beer in a miniature plastic barrel for novelty value. Cue lots of drinking straight from the tap. 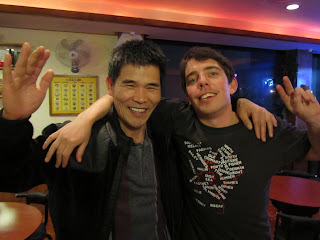 Rowan with his new best chingu (friend) several beers and sojus later.
We got up fairly early the next morning (i.e. in the morning), to catch the bus to Jindo island for the unofficial festivities. As we feared, the bus was rammed and we had to stand all the way for over an hour. It was really hot and I ended up stuck under some guys armpit the whole way which wasn't much fun. It was a relief when we finally got there though we had to get taxis from the bus station out to the sea parting site as it was a fair way off. By the time we arrived at the shore, the sea was already beginning to part and a ragged road was starting to emerge between the waves. There were huge crowds of people there already too, jostling for position and brandishing their dslr cameras. 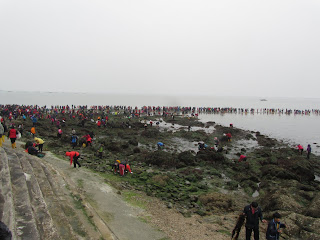 On the slimy, rocky shore of Jindo. You can see people walking out on the "road" through the sea towards the smaller island. It was a pretty amazing sight.
As we looked at people wading through the water and across the wet pebbly beach we realised that wearing trainers was probably not the brightest of ideas, as even when the sea road was at its widest and most uncovered, some sections were still knee deep in water. Luckily, we weren't the only idiots who had arrived less than fully prepared so there were people selling disposable rubber sock "boots" that looked like those rubber gloves people wear to do the dishes but with feet instead of fingers. They weren't much thicker than rubber gloves either and they had run out of "large-ee size-ee" so wearing these things and walking on the sharp pebble sea floor was pretty excruciating. Still, it made everyone look ridiculous so it was worth the pain. Helped keep you dry too. 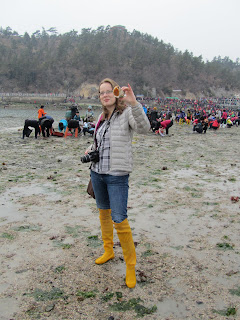 This is me, standing on the mysterious sea road, in my achingly stylish yellow, rubber sock boots with my ex-camera round my neck (read on for the tale of my worthy little friend's demise - sob).
Despite the pain, walking along the sea road was pretty cool. Seeing a column of people over a mile long apparently marching out into the sea was a pretty awe inspiring sight, even if some sections of the land pass remained a little waterlogged. Unfortunately, I got carried away taking loads of photos as usual so Rowan and I didn't make it all the way over to the small island at the other end as we ran out of time and the tides started coming back in. Apparently, though, the authorities weren't allowing people actually onto the island anyway, so I don't think we missed that much. 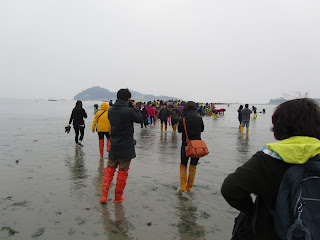 Walking out on the muddy road away from Jindo. 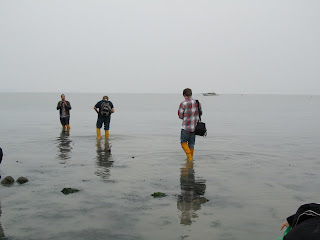 Splashing through the submerged sections of the "road'! 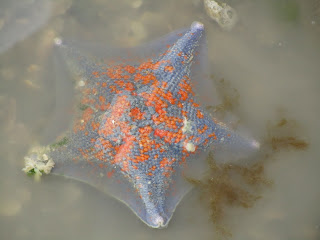 We saw lots of these pretty blue and orange starfishes on the sea road. They were so strange looking to me that at first I didn't think they were real! 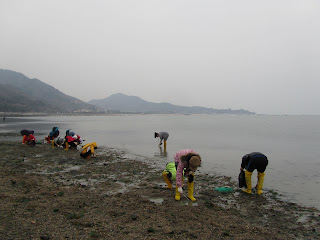 There were lots of Korean families and older folks too collecting seaweed and other bounties of the sea. I think they're digging for clams or abalone here. 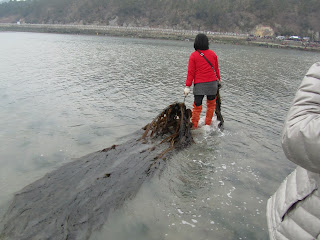 This woman grabbed herself a bumper pack of seaweed! 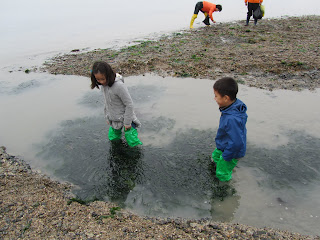 These kids weren't interested in digging for food. They just wanted to have fun splashing around in the sea! 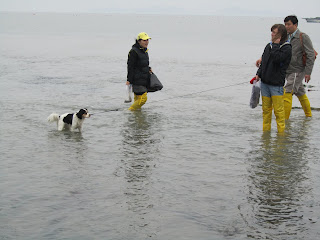 Not everyone was able to get waders. Take pity on this poor little bedraggled doggie. The sea level at some points was so high he had to be carried! 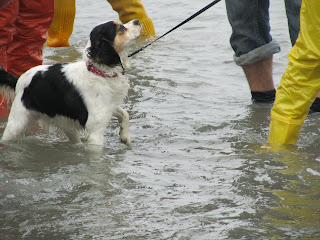 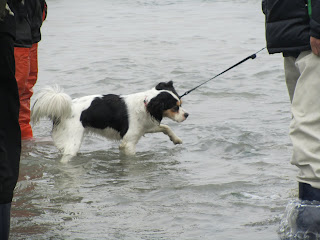 But it tried to high step it over the waves! The owner took pity eventually and carried it through the deeper bits. We also saw a Korean guy giving his fashionably clad girlfriend a piggy back through the submerged parts and other people told us they saw an ajumma (Korean older lady) giving a piggy back to another ajumma too. 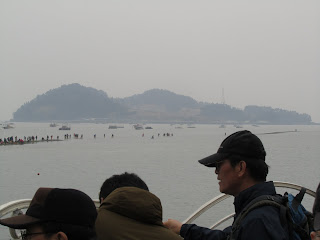 A view of the island that we never managed to reach due to the rising tides. 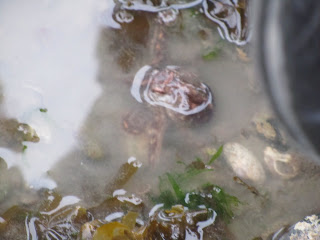 On our way back to the Jindo side of the sea road we saw this baby squid. This is the last time anyone ever saw it alive as a macho Westerner decided to eat it - alive. Poor thing.
We made it back to the safety of the Jindo shore before the tides swept us away and were relieved to prise our feet free of the rubber sock things. It was then that we saw the best thing at the Jindon Sea Parting - the dancing ajummas! Despite the festival officially being cancelled, there were still a few food stalls and some guys dressed up in traditional looking costumes and wearing copiuos amounts of make up serenading the crowds. Check out my video (below) of some fun loving Korea old folks having a bit of a dance. This was pretty early on. Later, presumably after some makgeolli and soju had been consumed, we spotted a group of ajummas dancing with the plastic chairs! That really made my day and they were so friendly!
Unsurprisingly there was a real crush to get the bus back to Mokpo but we made it eventually and stayed there another night. We actually liked Mokpo a lot more this time around compared to when we stopped there on our way to Jeju last summer. It didn't seem as rough and dirty as we first thought so, Mokpo, sorry for the bad write up last time! We checked out another local hof  that seemed a bit more upmarket than the last place though I preferred the first one we went to - fake plastic beer barrels can't be beat. We got the big comfortable express bus back to Yatap though it was roasting hot on there - you couldn't tell though form the way the Korean passengers were dressed, in their hoodies and hats and winter coats. Because we were feeling a bit lazy a few of us decided to get a taxi back from Yatap rather than waiting around for a bus. It was on this fateful taxi ride that I was forever parted from my beloved Canon dslr camera. We were tired and didn't look properly when we got out of the cab and the camera bag got left behind. RIP. Pretty devastating stuff as you can imagine as I lost all my photos and all my lenses too. Rowan tried his best to track it down and put up posters around Yatap but to no avail. Someone's partner or child got a special present that weekend. I hope it exploded in their hands!  Or maybe just in the hands of the person who took it. Suffice to say I eventually gave up hope of ever seeing it again and had to buy a new one and replace all the lenses which left a bit of a hole in my bank account. Worth it though. Had an excuse to get a newer model with HD Video capabilities though so not all bad!
Posted by Sophie at 16:24