Way back on the last weekend in February we went to the zoo in Seoul Grand Park.with our British 'chums' Danny and Charlotte. This was their last weekend in Korea as they were heading off to Thailand to teach and travel later that week so this was one of the last times we would see them for a while (sniff sniff). Actually, this is a problem that seems common to life as a teacher in Korea - you find some people who on get along with, become good mates with them and then you're brutally wrenched apart when they leave to go back home or move onto a different country. Suppose that is a situation common to most ex-pats though, regardless of their country of residence or their profession.
So we were pretty sad that they were leaving but we had a good day out at the zoo. Even though it was still only February it was a pretty pleasant day, not too chilly and clear. It's a really cheap day out, at only 3000 won (about £1.80 or $3) for an adult ticket which is incredibly cheap though I think you have to pay extra if you want to see the dolphin show (we didn't bother with it). It's a big zoo, with the usual animals on display and most of them seemed to be well looked after with plenty of space to move around. The most notable exception was probably the wolves who looked bored and thoroughly miserable pacing up and down in  their too-small, glass fronted enclosure. The zoo is actually within the grounds of Seoul Grand Park and we took a colourful little motorised 'train' from the main gate/car parking area of the zoo to the entrance. We took a leisurely stroll around the zoo, checking out the monkey house, the giraffe enclosure, the tigers and various other exhibits. I used the zoo as an opportunity to get my dslr camera put and test my tripod skills, taking lots of pictures of the animals - I even managed to snap the extremely rare Lesser Spotted Horned Waygook that had managed to slip out of it's pen (see below for the incredible picture - National Geographic eat your heart out!). 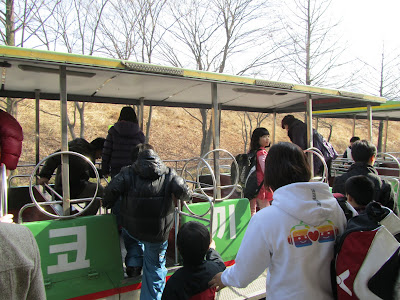 Taking the motorised 'train' to the animals. The zoo is pretty big and its a bit of a walk from the car park to the actual exhibits. 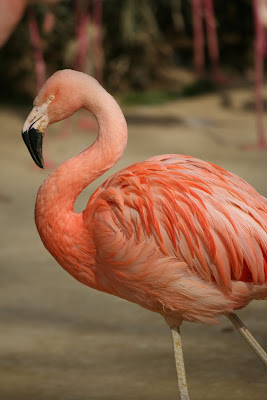 There were lots of pretty flamingos. They looked a bit artificially pink I thought. 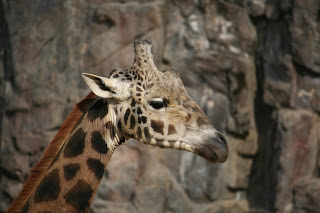 Why the long neck? 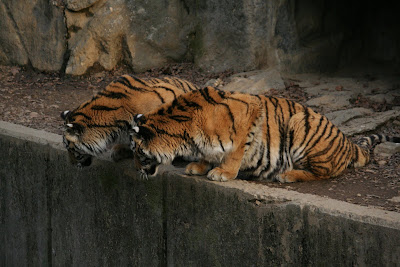 There was a large tiger enclosure at the zoo. They were separated from the visitors by a large, wide, very deep concrete trench. The tigers were very excited when we saw them as a red balloon had floated into their enclosure and was being 'hunted' in the trench by a couple of the braver tigers. These guys just stayed on the edge of the trench, watching. 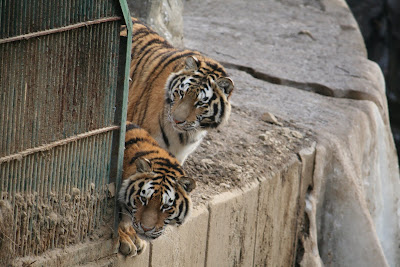 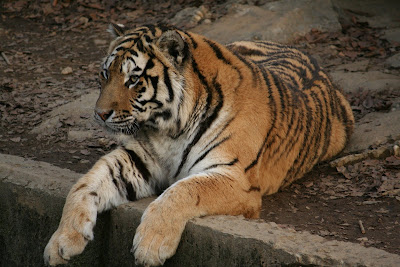 This tiger was too chilled to get involved in the balloon hunting shenanigans. 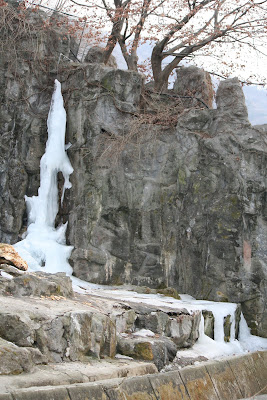 Frozen waterfall in the tiger enclosure - it was still quite chilly when we visited the zoo. 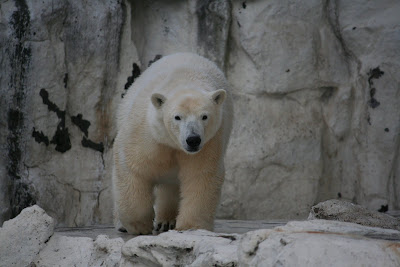 The polar bear seemed at home with the cold winter temperatures in Seoul. 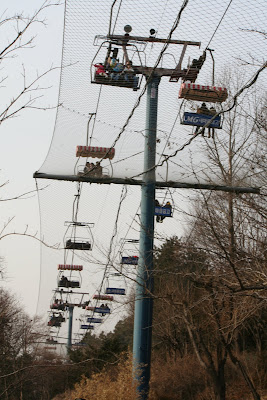 This is the scary looking chair lift that takes you around the park. Some of our group weren't keen non heights so we gave it a miss. 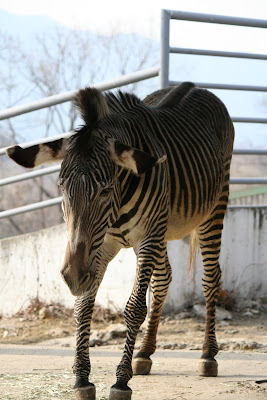 This was one of the craziest, dopiest looking zebras I have ever seen. It was skittering around like a new born foal that hadn't learnt how to use its legs properly yet. 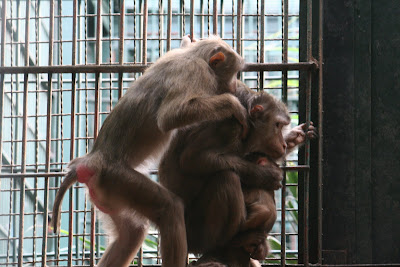 The small monkeys were entertaining, running and swinging about and play fighting. There was some serious x-rated monkey mating going on too - one of the lady monkeys were really into it - felt a bit sorry for the poor old boy monkey, he looked knackered. 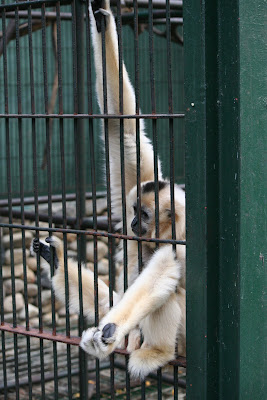 Many of the monkeys were begging for food. Probably because stupid people were feeding them junk food like potato chips and chocolate through the bars. We watched a family feeding this monkey - the parents were encouraging their kids to pass snacks to the animals morons. 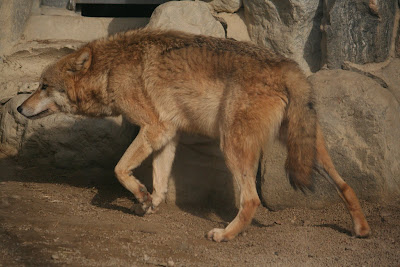 One of the the poor bored looking wolves pacing in its small enclosure. 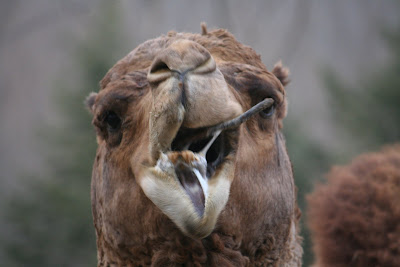 The camels looked pretty happy though and were busy eating everything they could get their mouths to. This is the grossest picture I managed to get of one. Gotta love that camel spit. 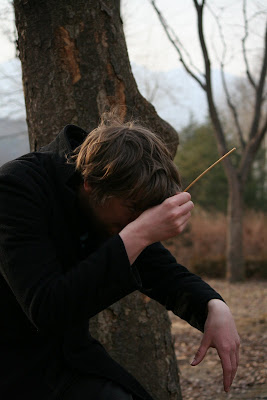 I was lucky enough to get a picture of this unusual, shy creature - the Lesser Spotted Horned Waygook. 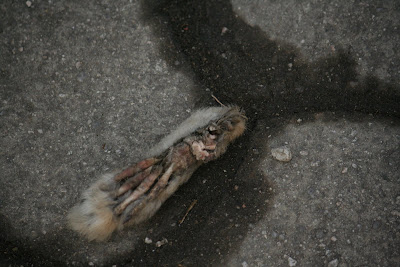 We found this dismembered paw outside this monkey area - god knows what it came from or why it was there. 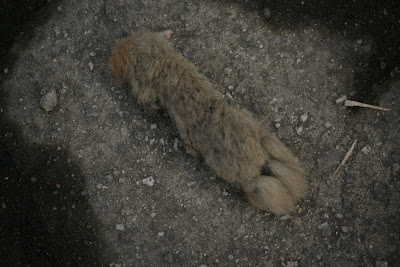 Top side of the dismembered paw. 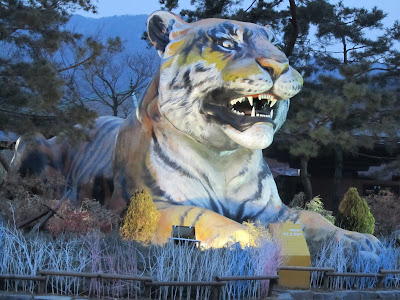 Cool plastic tiger at the zoo entrance. It was lit up in the evening as we left.
After a long day of wandering around the zoo, we headed back towards Danny and Charlotte's neck of the woods in Godok, Seoul and had some dinner at their local Chinese restaurant. It was a more classy affair than what you'd usually get at a Chinese restaurant in Britain and the menu was quite different too. We had beef with chillies wrapped in tin foil and set alight at the table which was tasty, both visually and orally. As is the custom among English teachers in Korea, we rounded the night off with some throat ripping renditions of our favourite songs down the local norae bang and crashed on the floor round Danny and Charlotte's. 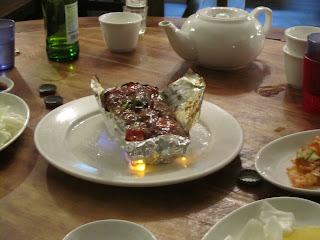 Our flaming pork in tin foil thingy - it was delicious. 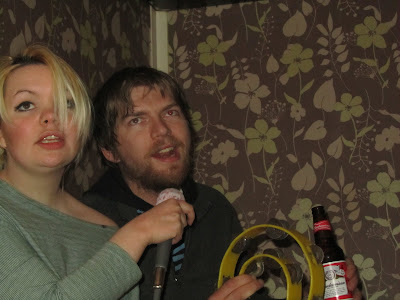 Danny and Charlotte getting into the norae bang spirit. 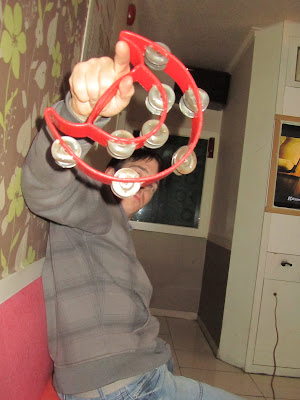 Rowan adds to the beautiful (not!) harmonies with a bit of tambourine shaking.
It was a wet and miserable morning the next day and it was sad as this was one of the last times we would see them but on the bright side we took off home with a taxi load of stuff that they had given us including Zebra the zebra shaped table. So maybe having your friend's leave Korea all the time isn't such a terrible thing after all as you usually get at least a few books out of it!
Posted by Sophie at 23:49