Our first visitor from home

Back in spring we got our first visitor from England, to be honest I hadn't really expected anyone to make the long journey out here. Korea is neither cheap nor easy to get to from England, and doesn't exactly have a huge amount of beaches or good weather, so it's not a common tourist destination. Still our friend Tom who we know from university made it all the way out here just to see us, which was quite an honour.
His journey out here went completely smoothly for thousands of miles until he was a few miles from Gwangju when his bus broke down! So he was sat by the side of the road waiting for an hour for a new bus to come along and take him those final few miles. Luckily he'd hired a phone at the airport so we could keep in touch and I knew what had happened. When he finally arrived we returned to our apartment and had a bit of lunch and then didn't do much for the rest of the day. Tom was obviously pretty tired from an 11 hour flight plus bus delays etc. so we just chilled out, had a chat and caught up on news and gossip from home.
In the evening, we met up with our neighbours and some other friends and when out for duck. We have recently discovered that duck is one of the most delicious foods in Korea. At our favorite duck place in Gwangju their special is duck cooked in two ways. First you get duck shabbu shabbu which is very thinly sliced duck which comes out with a pot of broth boiling away on a little table top stove. You take the thin slices of duck and dip them into the boiling broth to cook them. After all the duck is cooked you get some noodles to cook in the broth and finally some rice to soak up the last bits. After the shabbu shabbu the second and best course comes out, thick slices of duck roasted inside a pumpkin and sprinkled with nuts. The pumpkin soaks up the duck fat and picks up its delicious, rich taste. 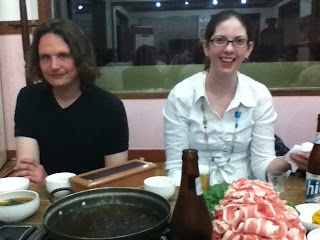 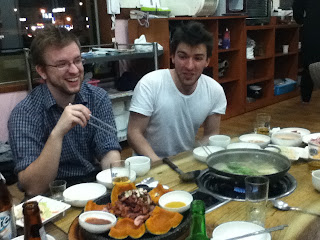 Our neighbours' friend Adam was visiting from Canada at the same time as Tom, he's the one laughing in the foreground. You can see the duck in pumpkin in the front of this picture. It comes in thick slices with a topping of nuts and pumpkin seeds. 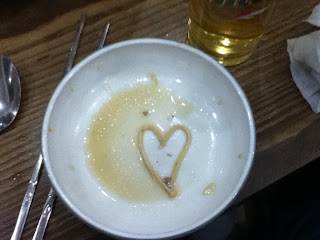 A rather sickening picture that is only worth posting because it was honestly not staged, this is just how the noodles fell at the end on the bowl.
The next day we decided to take Tom on a tour of Gwangju. There seemed to be some kind of festival going on in the stadium across the road from our apartment so our first stop was in there to see what was going on. Whatever was happening it  wasn't much clearer from inside the stadium. Groups of kids seemed to be marching around, a guy on the stage was shouting into an echoing PA and various people from the city hall were hanging around for photo opportunities, I've no idea what it was all in aid of though! 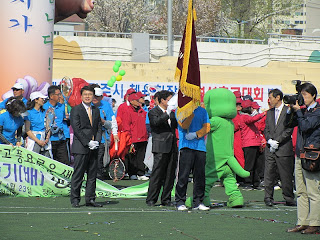 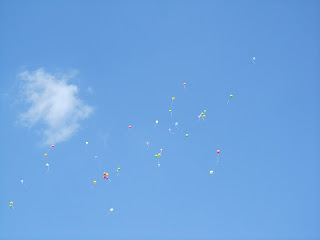 Balloons that the kids released.
After we finished there we strolled through the rest of town taking in the local market and other things which we've covered in detail in previous posts. We came through the center of town and ended up at the edge of the fields that lead to Sophie's school. The weather was just starting to warm up after the long cold winter and for the first time in months the fields were free of snow. So we decided to take a walk through the fields and look at a traditional graveyard just above the fields which we'd been wanting to check out for a while but it had been far too cold. The graveyard was really beautiful the weather was just right for talking a stroll. The dead dog dumped by the side of the road wasn't so beautiful but gave Sophie an interesting subject to photograph none the less. 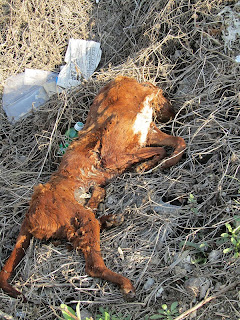 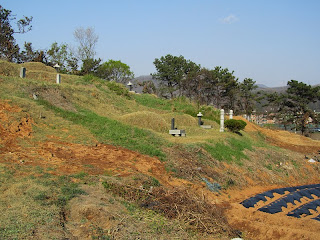 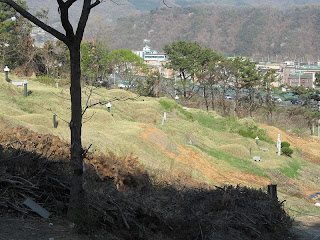 Korean grave yards are very different to English graveyards. They're not next to a church or temple but are usually found on the sides of hills out in country side, they're also one of the few places in Korea where you see grass as the trees are cleared away. 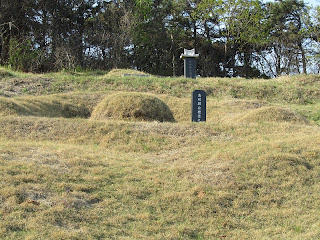 The Korean graves do have grave stones as you can see but the the main feature of the grave is a grassy mound. The graves are kept pretty well maintained as families visit the graves several times a year for various special days


The next day we headed into Seoul our first stop was Namdaemun, to show Tom around the market but also to visit Sophie's favorite little camera store, a place called Yesdica. You can find directions and an excellent guide to camera shopping in Korea here. Our reason for visiting this time was because Sophie needed to get a new camera. Without going into too many details, some idiot left the camera bag with the camera body, three different lenses and various other accessories behind in a taxi. Yes, I was that idiot and somehow Sophie managed not to kill me! I'm really not sure I'd have been so forgiving if the roles were reversed. So with our wallets about a million won (just over £500) lighter we headed off to the war museum to take the new camera through it's paces. 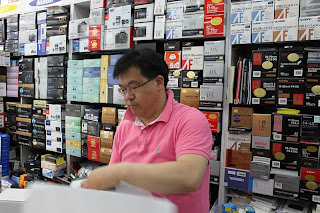 The friendly owner of our favorite Korean camera shop
It was our second visit the war museum. To read about it in more detail check our first post: http://bloodriceandnoodles.blogspot.com/2011/06/seoul-museums-part-3-war-memorial-of.html
It's a massive museum and despite this being the second visit we've still barely scratched the surface. From our first visit we saw that there was a lot of cool stuff outside, so since the weather was good and it was getting a bit late in the day we concentrated on the vehicles, statues and other assorted stuff out there. One of my favorite "weapons" on display at the museum were the propaganda speakers which were used to  broadcast material over the border to the north. Apparently these speakers had a range of 15 kilometers - now that would make for a good party. 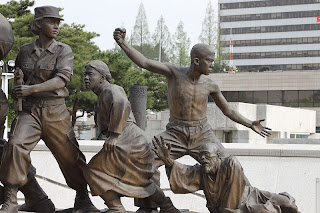 Civilians in the bronze monument out the front of the museum. 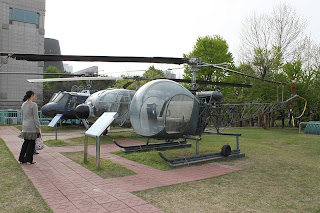 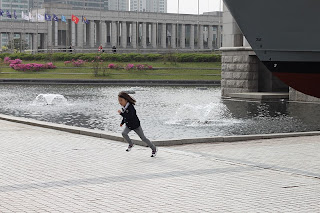 Little girl running with prow of gunship in the background 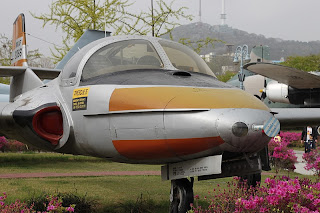 A plane... of some kind or other 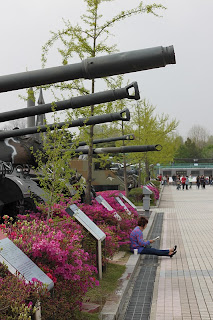 The guns of an assorted array of tanks - with some pretty flowers - nice spot to read a book. 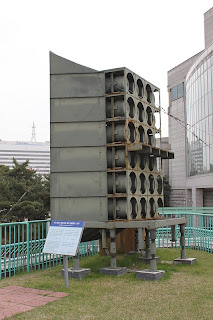 The previously mentioned speaker with a 15 kilometer range. 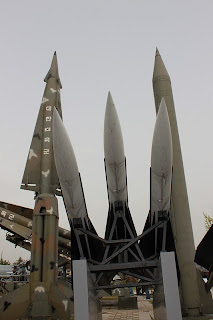 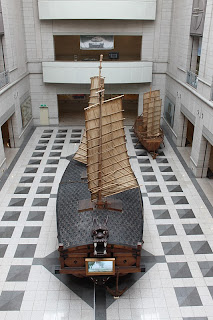 One of the few indoor pictures, this is a replica of admiral Yi Sun Shin's famous turtle ship, the revolutionary fully enclosed deck studded with iron spikes lead to many victories against the Japanese forces in the 1500's and Korean's are still very proud of this ship. 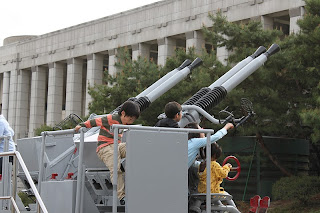 Kids playing on some anti aircraft guns, It's nice to see weapons of war becoming a playground for kids. 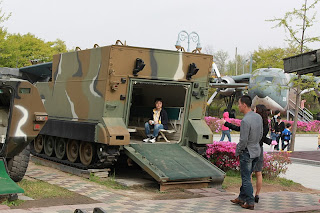 Lot's of the vehicles were open so you could climb around inside and have a look, Korean museums tend to be much more hands on and interactive than their English counterparts. 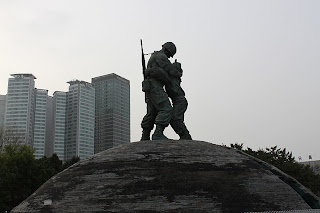 Statue of a soldier and civilian embracing.
During the week that Tom was with us we were still working, so we had to leave him to his own devices during the day. He got up to all sorts of exciting things like hiking up Bukhansan, (a big mountain north of Seoul). And visiting Chuncheon, which is a pretty town in the mountains at the border of our province out to the east.
While Tom was around we took a trip to Moran market, which is apparently the biggest market in Korea. At some point we will do a more details post all about Moran market, it really is an amazing place when you can see all kinds of Korean culture and find everything from roast centipedes to live geese, not to mention whole roast dogs and various steamed offal. It truly is an assault on all the senses. 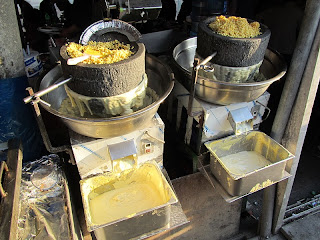 Corn being milled into pulp by stone grindstones. 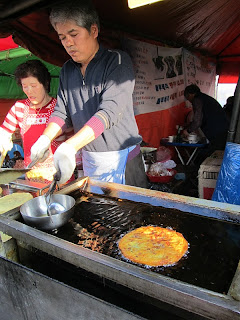 Pancakes being fried up from the corn pulp being milled in the previous picture. 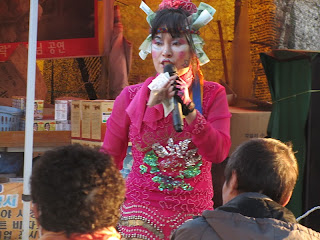 The traditional entertainment at the market, a man playing a rather unconvincing woman with money in her hair. 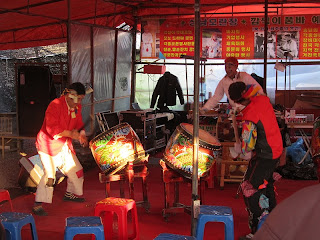 The guys banging drums to provide a beat for the dancing "girl" to sing and dance to. 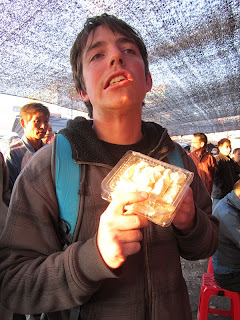 No I haven't had a stroke, I'm eating some incredibly chewy sweets that the dancing and druming guys were selling and am trying to prise my teeth apart.

Some video of the guys doing their stuff.

After spending a week with us Tom headed off to visit our friend Dean down in Jeju, an island off the south coast where he now runs a guesthouse with his Korean wife, Tom had a great time down in Jeju but since we couldn't come with him I can't tell you about that.
Over all it was really nice having a visitor to show around, it was great to see a friend from home and it was also nice to have an excuse to go around tourist sites that we'd been meaning to revisit for ages.
Posted by Rowan at 12:33