Leaving on a Bongo Truck

Following the end of Sophie's job in Gwangju-si, we had to leave behind our lovely apartment and move to our new place in Hanam. Despite having come to Korea with only two suitcases full of stuff we managed to collect a whole lot of stuff. Two of my co-teachers, the head of the English department and the boss of my office came along to help us move in their cars. After looking at our massive piles of stuff they quickly decided that there wasn't enough room in their cars so called for a man with a small "Bongo" truck to come and help move our stuff. It was quite an ordeal getting everything into the lift and loaded on to the truck, what with our new neighbors' pesky son trying to steal the stuff he took a shine to whenever we weren't looking and other neighbors just standing around having a stare at the foreigners and blocking the hallway in the process.

For the uninitiated, this is the ubiquitous Kia Bongo truck, a small 1 ton truck that you see everywhere in South Korea, often piled high with garlic or melons or some other fresh produce and driven round by an ajjoshi (Korean older man) with a recorded sales message blaring out of the onboard PA system.
We eventually got everything loaded and were ready to roll. Unfortunately, when we gave my teachers the address for our new apartment we discovered that there was a problem. The guy at Sophie's new school had only given us part of the address so we wouldn't be able to find it. Not a good start to the journey! We tried to contact the guy a few times but without much success. So there was nothing we could do but just head into Hanam and try to work it out as we went along. We jumped in the car with my teachers and the Bongo truck guy trundled off ahead of us.
We arrived in Hanam fairly quickly as it's only 12 miles from Gwangju-si. We then spent another hour or two just circling around trying to work out where the hell we were supposed to be going. My teachers were continually trying to call this guy at Sophie's school to find out where our new place was. In the end, when my teachers did get a hold of him he said he didn't know exactly where the apartment was because he'd never been there and he was busy and at home now so he couldn't find the address for us! It later turned out that this was the first in a long line of lies that we'd be told by this bloke but anyway we didn't know that then.
I don't really understand how we found the apartment in the end but we did. There was a lot of talking in Korean between my teachers and the guy form Sophie's school and the Bongo truck driver and somehow we got there but it had been a needlessly long and exhausting trip and I felt so bad about my teachers spending so much of their Friday evening helping us. They did it out of kindness not because they had to and it was lucky for us that they did help or we would never have found the place! The lovely woman who is the boss of my office then paid some local high school boys she saw on the street to help us carry all our stuff up to our 3rd floor apartment which was great! She then took us all for dinner at a nice restaurant on the edge of Seoul and insisted on paying and took us back to her beautiful apartment to show us her place. Luxurious would be the best word to describe her place!
We headed back to our place in Gwangju that night and stayed there for the rest of the weekend so we could hang out with our Canadian neighbors for a last time and enjoy being in a nice big apartment while we still could! We made a few return trips to Hanam by bus to take a few things that hadn't fitted onto the Bongo truck (I really don't know how we have accumulated so much crap!) and then properly moved in the day after Sophie finished at her school, midweek I think.
That's when the real fun started... (pictures below may upset people squeamish about bugs!) 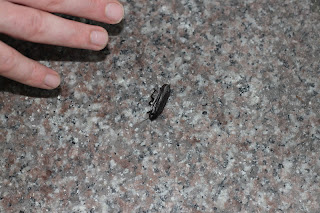 Yes those nasty pictures are exactly what they look like- 바퀴벌레 or as they are known in English, cockroaches! On our first weekend in our new apartment we caught as least twenty cockroaches around the apartment, it seems we had something of an infestation going on in our "lovely" new apartment.

Before moving we had done our best to find out as much as possible about the new apartment and new job, just as we had done before coming to our first apartment in Korea. Unfortunately the previous occupants of our new apartment weren't quite as forthcoming with information as the people who used to live in our old place. Before moving to Korea we had exchanged a series of emails with the current teachers there and they sent us lots of pictures and information. I sent an email to the current occupants of our new apartment before we moved but after exchanging one email I received this reply "This is the last email I will send you about my accommodation en details about my school.  In the future, please contact my Korean co-teacher." Helpful!

So we arrived knowing very little about the apartment, far less than we knew before coming to Gwangju. There were quite a few unpleasant surprises waiting for us when we arrived. They included, the apartment having only a single bed, despite us being told that it was suitable for a couple, the boiler leaking, the previously mentioned cockroaches, the lights in the hallways of the building not working, and the overall dinginess of the place.

The fun continued when Sophie arrived at her new school for the first day and the first time seeing her classroom, textbook, students etc to discover she was due to start teaching within about five minutes of arriving at school! So the first few lessons were a bit farcical as she didn't know how to work the technology and got very little support or assistance from her co-teachers. The rest of the day was so busy she didn't even manage to find the western style toilet until 4pm. The co-teachers also seem to all hate each other, and spend a fair amount of their time bitching about each other- apparently heated arguments across the staffroom are not uncommon. When she finally got to speak to someone about the various issues we had with the apartment she was told that she "had no choice." and was told to "just stop talking!" extremely frank words from Koreans who tend to make an art of of beating around the bush so much it's often hard to even know what they are talking about!


So all in all it wasn't exactly the best possible welcome to Hanam! But things aren't all bad. We are very close to a branch of Homeplus now which is owned by Tesco so carries a few more British products than the average Korean store. English mature cheddar, bottles of London pride and even cheesecake are now all within easy reach, albeit at extortionate prices. We are also very close that Han river which makes for a nice cycling trip, so we bought a pair of second hand bikes soon after arriving. We are also about 15 km closer to Seoul here so it makes it easier to have a night out in the center and get back without being bankrupted by taxi fares. There are even some good points about our building, most of our neighbours are also English teachers. This is the building where Hanam city council houses all the foreign teachers (and the city rowing team) and we have access to shared space on the flat roof, so we've had a few BBQs and parties up there.

We don't have many pictures of the apartment, but it's not much to look at, so I'll sign off with some far more picturesque photos taken during a bike ride alongside the Han, 15 minutes ride from out apartment. 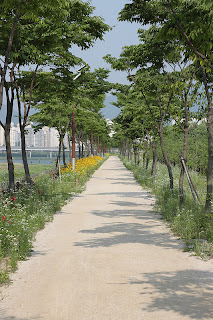 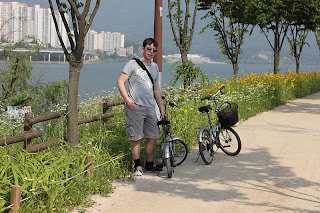 Me with my comedy mini bike, I thought a folding bike would be a good idea, but it was actually a piece of crap and I changed it for a proper mountain bike soon after. 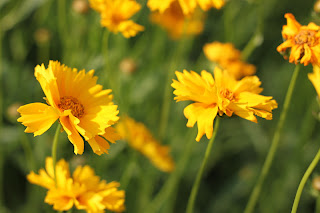 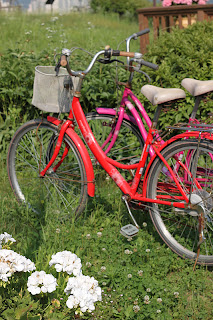 The route by the side of the Han is really popular with cyclists and there are some pretty nice cafes to stop at too. 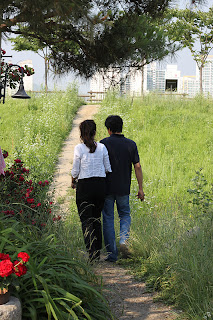 Couple out for a romantic walk 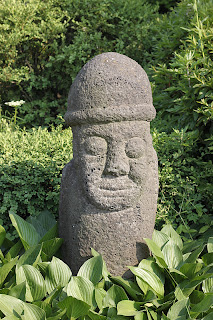 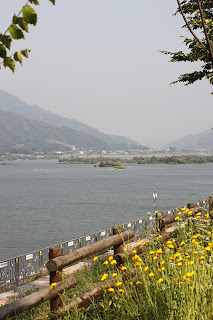 The Han river, not very picturesque in the center of Seoul but beautiful a few miles upstream.
Posted by Rowan at 23:07