We got up pretty early on our last day in Beijing to try to fit as much as we could in before our evening flight. We started off the day with a long subway ride to the far flung reaches of outer Beijing as I wanted to do a little camera lens shopping. Electronic goods are seriously overpriced in Korea due to the extortionate import tax they slap on everything non Korean and even domestic goods are more expensive than they would be in the UK or America as there isn't so much competition due to the import tax. So buying camera equipment can be pricey here (unless you buy "grey market" goods) and prices in China looked pretty tempting.


We travelled out to the outer ring of Beijing city to go to an electronics market there. I was still feeling rather sick from my food poisoning but that didn't manage to dampen my zeal or buying camera stuff. I ended up with a new macro lens at a much cheaper price than I could have got it for in South Korea so I was pretty pleased. One of the weird things we noticed in this part of Beijing well away from the tourist areas was the throat tickling smog. The pollution really was noticeably worse and we were very glad when we got back on the subway and escaped to the more tourist friendly cleaner air of the old city.

After the camera shopping, we headed back to Tiananmen Square to try to see the preserved remains of Chairman Mao in his mausoleum. Mao Zedong was the leader of the Chinese Communist Party from 1945 until his death in 1076. Despite signing a proposal that all Communist Party leaders should be cremated after death, he was embalmed and housed in a large mausoleum in central Beijing.

Embalming dead leaders seems to be a common pastime for Communist countries. I've been "collecting" dead embalmed Communist leaders since 2003, well not the bodies themselves but my sightings of them. So far, I've seen Lenin in Moscow, Ho Chi Minh in Hanoi and now Chairman Mao in Beijing. To complete my collection I need to get to North Korea to see Kim Il Sung and Kim Il Jong but I don't see that happening any time soon. Stalin used to be preserved and on display with Lenin too but they kicked him out in 1961 as part of the de-Stalinization process and buried him outside the Kremlin.

Picture from the time when Stalin and Lenin shared the same Mausoleum in Moscow. (photo from http://www.comtourist.com website)

Stalin and Lenin embalmed and laid out in their mausoleum. (photo from  http://www.comtourist.com website)

As with Lenin and Ho Chi Minh, Mao's Mausoleum had very strict rules for visitors including no cameras, no talking inside, no smoking and no short or miniskirts. As we had the camera bag with us we decided to take it in turns going inside the mausoleum. I went in first. There were loads of people queuing to get in, many of them Chinese families carrying armfuls of flowers for the departed leader that were available to buy by the entrance. We joked that the flower sellers just picked up flowers laid out in the memorial hall and sold them over and over again to gullible visitors.

The mausoleum of Mao Zedong. (Photo from Wikipedia)

There was quite a jolly, celebratory atmosphere as we wandered through the outer hall and were ushered towards the inner room by uniformed honour guards. Chairman Mao was laid out in his open topped glass casket. He looked like a waxwork just like Lenin and Ho Chi Minh did. Many people claim that they are all actually waxworks anyway but who knows. The guards were quite subdued and low key in Mao's mausoleum compared to what I saw in Lenin's lace and Ho Chi Minh's where the soldiers were conspicuously armed and hyper alert looking. They just stood quietly watching the gawping visitors and occasionally moving people on if they dawdled too long as visitors were supposed to keep moving at all times. Mao was quite a short looking man and looked just like he did in photos taken in the 1970's. He had a flag or some kind of covering over most of his lower body so you could only really see his head and shoulders. 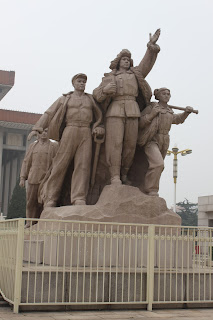 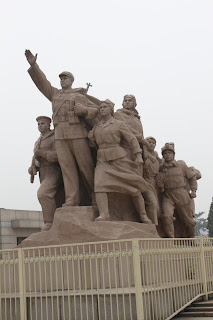 These two sculptures of good Chinese workers were located near the entrance to the Mao Mausoleum. 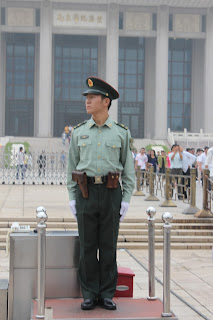 Soldier standing guard in front of the mausoleum.

It didn't take long to wander through the building then I was out again in  the sunlight in front of the Mausoleum and it was Rowan's turn to visit the Chairman. Overall quite a surreal experience but good to add another dead Communist leader to my collection. I entertained myself watching life go by on Tiananmen Square for a while until Rowan got back then we headed back towards ourt hostel for our last bit of sightseeing in Beiijing - the Yonghegong Lama Temple. The Yonghe Temple and monastery is also known as the "Palace of Peace and Harmony Lama Temple" or just the "Lama Temple" and is the biggest and most important Tibetan Buddhist monasteries in the world. We were lucky as our hostel was just a 3 minute walk away from the temple.

The Yonghe Temple, known informally as the Lama Temple. (photo form Wikipedia) Lamaism is a sect of Buddhism followed in Tibet, Mongolia and some Chinese provinces. Its name "lama" comes from the Tibetan word which means "teacher".

The Yonghegong Temple was originally built as a residence for court eunuchs in 1694 then used as an imperial palace by Prince Yong before being converted in to a lamasery in 1744. A lamasery, by the way, is a monastery for monks of Tibetan Buddhism. The monks came from Tibet and Mongolia in large numbers and made the lamasery the national centre for Lama administration. Apparently, the Lama Temple was saved from destruction during the Cultural Revolution (1966-1976) by the then Prime Minister Zhou Enlai. It was reopened to the public in 1981. 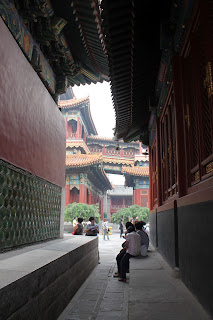 An alleyway between temple buildings in the Yonghe Temple complex. 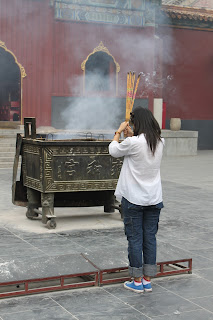 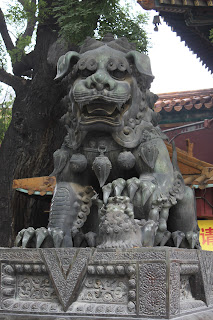 Lion statue at the temple. 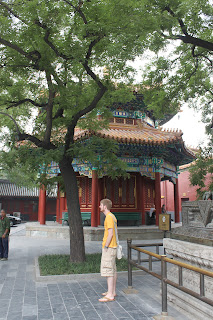 Pavilion at the Yonghe Temple. 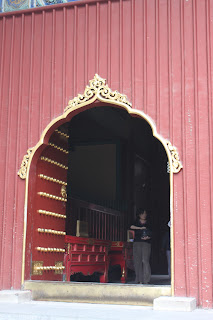 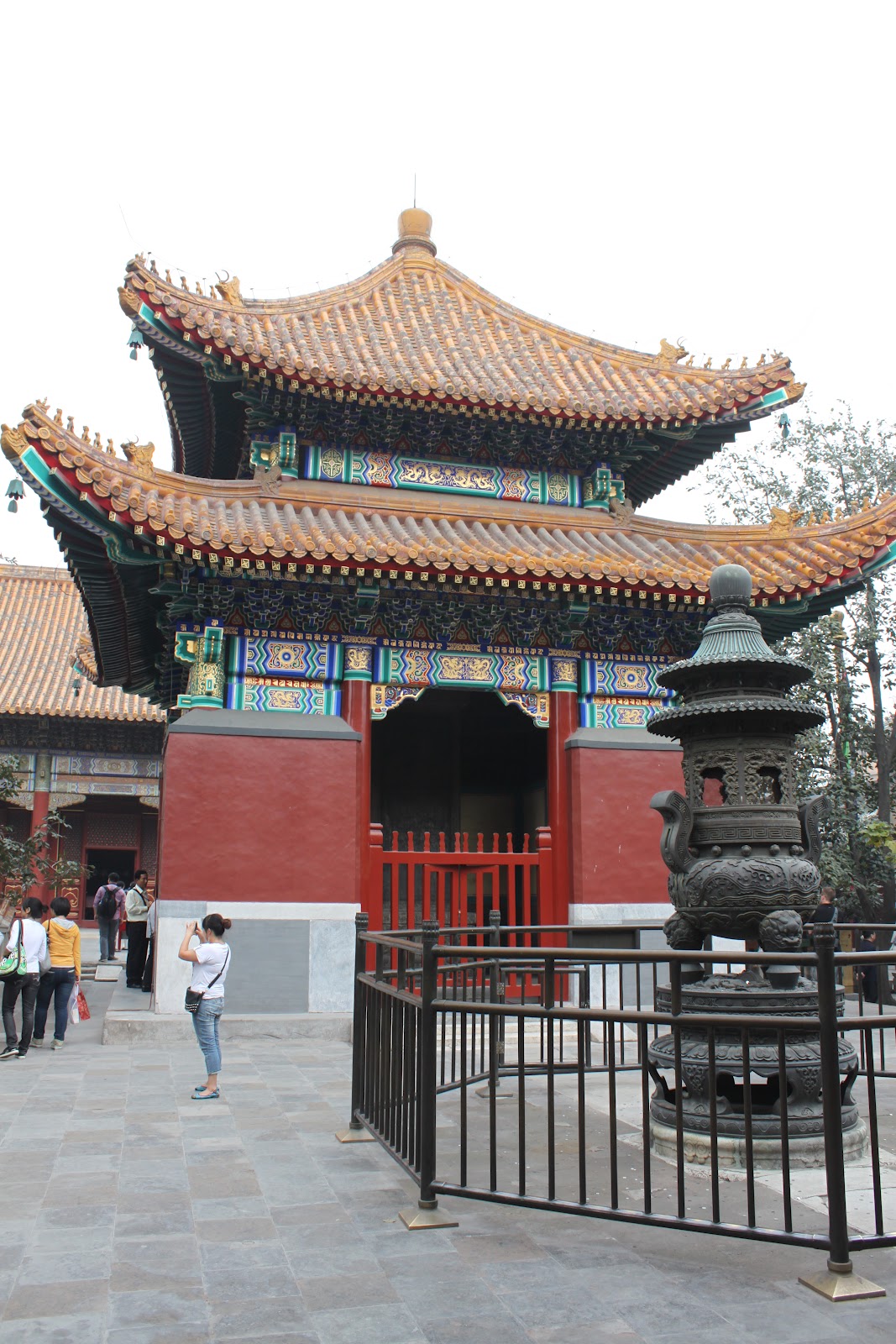 All of the temple buildings had these amazing curved roofs with yellow roof tiles, indicative of it's origins as an imperial palace. 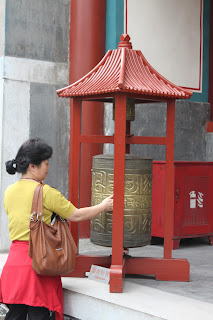 We saw many people using these prayer wheels. The brass cylindrical wheel has Tibetan Buddhist prayers written on it. The idea is to spin the wheel around in an anticlockwise direction and this will have the same effect as reciting the prayers orally i.e. to purify bad karma and accumulate good karma. 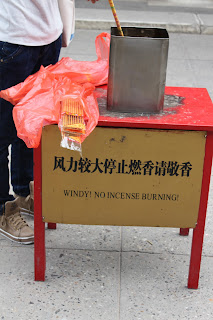 Is it windy - then don't burn incense today! There was so much incense being burned at the temple that the air was thick with smoke that made my eyes water. 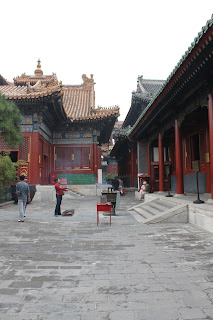 Courtyard in the Lama Temple. 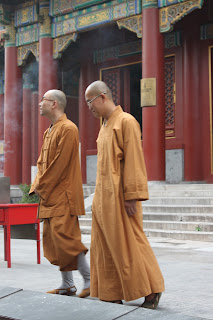 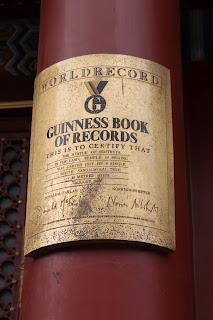 The Yonghe Temple has a Guinness World Record for its 26 metres high Buddha statue which was carved out of a single piece of white sandalwood tree. It was just one of many hundreds of Buddha statues to be found throughout the temple. 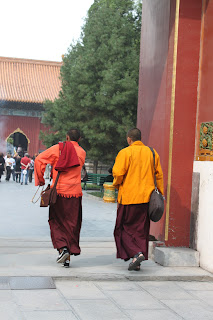 Another pair of monks wandering about the temple.

We only had a short amount of time left to see the temple so it was a bit of a rushed visit but it was still very interesting and a really beautiful temple, the first lamasery I've ever been to! I love the smell of incense burning in Buddhist temples, it feels relaxing (damn hippy!) although there was so much in Yonghe Temple that it became less relaxing and more choking but never mind.

After pour brief visit to the Lama Temple, we headed back to our hostel one last time to pick up   our bags then headed back to the airport by way of the subway. It had been a really fun five days in Beijing and we really liked the city. I'd love to go back one day but that won't be happening in the near future as foreigners in Korea are not allowed to travel to China unless they have 6 months left on their Alien Registration Card (a kind Korean ID card) - silly rule!
Posted by Sophie at 10:45