Our first couple of days in Gwangju

We arrived in Korea on a Friday afternoon and went to bed fairly early that night as we were sooo tired after the journey. By Friday evening I kept feeling like I was about to fall over even though I was just standing still in our apartment - definitely time to get some rest! We both felt much better on Saturday morning and surprisingly didn't seem to have suffered much jetlag which was
cool. We spent the weekend getting to grips with our apartment, exploring Gwangju our new home town, and we even took a trip out to Bundang on Sunday which is a wealthy district close to Seoul and about 30 mins away from Gwangju by public transport (on a good day).
Firstly, our apartment - we love it! It's bigger than our place in London was and it's on the 15th Floor (though actually it's the 14th Floor by UK standards but the Koreans count the ground floor as the 1st floor). We have great views from the windows out over Gwangju city and to the hills beyond. 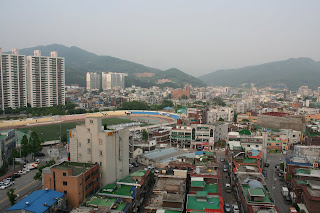 View from our front window out over the stadium
Apparently we wouldn't get this if we lived in a bigger city as there would be too many other high rise buildings in the way so that's one good reason to live in the rural backwater that Gwangju apparently is (it's not rural by UK standards with a population of about 230,000 but my colleagues at school say it is by Korean standards). Our apartment has a Western bathroom with real bath which is apparently unusual and a study room and a totally pointless spare bedroom - it's pointless because it doesn't have any furniture in so we just use it as a suitcase storeroom! 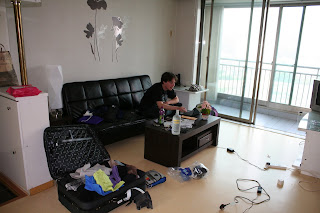 Rowan hunts for an internet connection in our apartment on our first day, hence the open, as yet unpacked suitcase in the foreground.
We also have a big enclosed balcony which is really cool but which Rowan is slightly scared of due to the 14 floor drop! 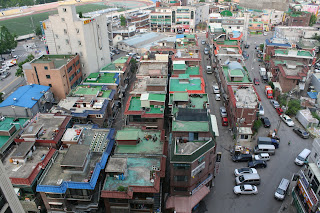 Our friend Dean came over on Saturday afternoon and we explored Gwangju together. He has been living and teaching in Korea for more than 2 years so he was a great guide. The fact that he can speak and read Korean really helped too! Gwangju is a fairly small city, in fact it feels more like a big town. 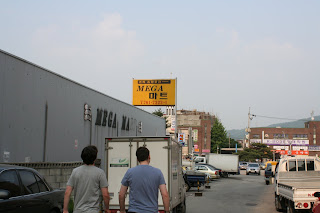 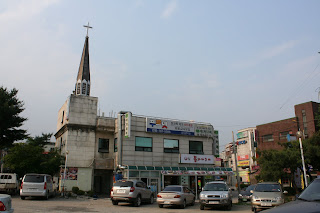 One of Gwangju's many churches. At night the crosses are lit up with red neon. We can see at least 15 from our window. 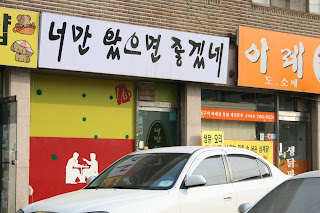 See the picture of a man and a lady playing chess - apparently that is a sign for a place where a gentleman might go to get a little female company... 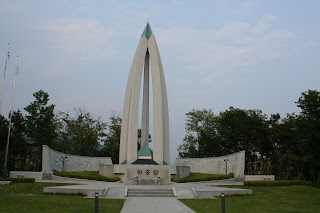 Giant public juicer for use by Gwangju's citizens! No actually it's a war memorial for the defeat of the Japanese. 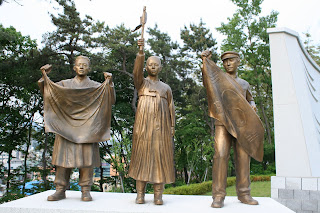 Korean citizens celebrating the defeat of the Imperialist Armies. 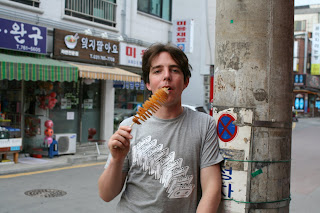 The main reason Rowan came to Korea - to eat Tornado Potato. A whole potato cut into a spiral, deep fried and dipped in cheese powder. 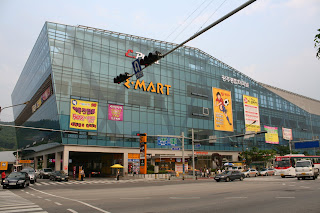 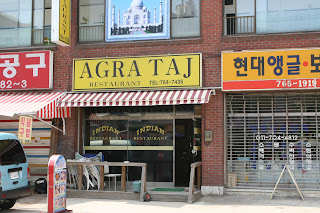 One of Gwangju's many genuine foreign restaurants run by real foreigners and everything. This one is Indian obviously. Gwangju is unusually cosmopolitan by Korean standards as it has a lot of migrant workers from SE Asia living there. 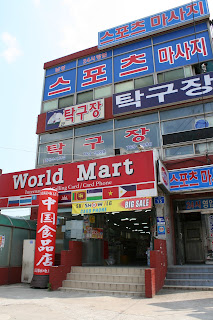 The mighty World Mart, home of all sorts of exciting foreign produce and the place to go to get your pay-as-you-go phone sorted out. 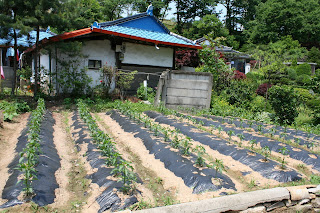 Chillies growing by the side of the road, every spare bit of ground here is farmed for something, tiny patches of chillies and lettuce are dotted round everywhere.

On Saturday night, Dean took us out for dinner. We had sam-gyop-sal (a barbequed bacon-type pork), which is a traditional Korean meal where you get to sit around a table with a barbeque on it and cook your own meat and vegetables - DIY eating out Korean stylee! The bacon was really tasty and the kimchi was much nicer cooked than raw (more on Korea's favourite dish later).

On Sunday, we went to wealthy shopping Mecca Bundang. It was a world away from our little Gwangju what with its expensive shopping malls, high rise buildings and big, planned parks. 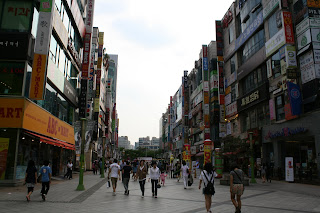 Shops on the road between Bundang station and the park, one of the few pedestrian areas we've seen although its still open to scooters and motorbikes. 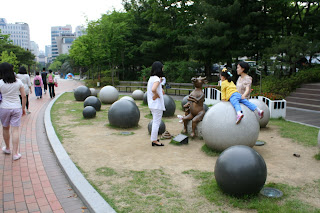 Korean balls in the park, if you look closely to the left of the bronze cow you will see a small bronze poo!