We set off on our tour of Korea on a Friday afternoon right after school ended, catching a coach from Seoul Express Bus Terminal (what an inspired name that is). Sokcho is on the east coast so it is pretty much the other side of the country to Seoul and is in Gangwon Province right up near the border with North Korea. It took us about 3.5 hours to get to Sokcho by coach so we didn't get there til about 9pm but luckily for us the bus terminal was really close to the beach as were loads of motels. We found ourselves a likely looking motel for 50,000 won a night (a bit more than we're used to paying to be honest but it was high season), dumped our stuff, bought some beers and went out to explore. 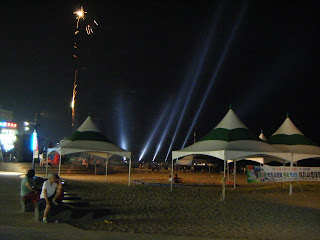 At night, Sokcho beach was lit up by fireworks and lasers. It looked a bit like there was a war going on as there were so many rockets firing up over the sea. 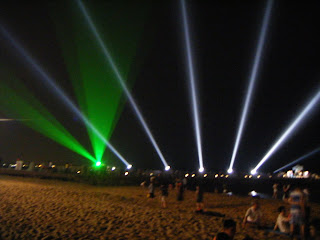 Apparently some of the lights were lasers and some were searchlights looking for enemy infiltrators from the North. 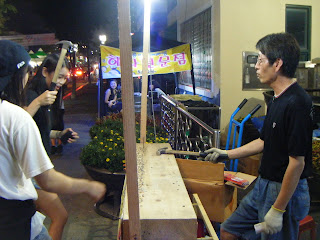 This guy was running a rather popular stall near the sea front. It was the 'hammer a nail into a piece of wood' game - unusual. 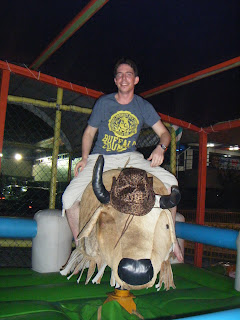 There were some funny little fairground rides in Sokcho including this bucking bull/ womble thing.
On Saturday, we moved to a cheaper motel as the one we were staying in was hiking their prices up for the weekend and hey, we were on a budget! It was still 50k a night though and it was a bit of a dump too. We did get lots of free, complementary mosquitoes though! 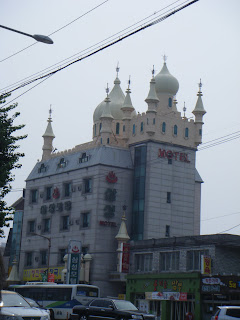 The funny Disney-esque Samsung Palace Motel. Alas, we didn't stay there as we were too tight! 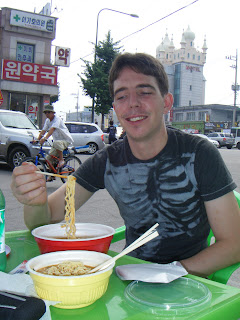 Our first ramyen (instant noodles) breakfast of our vacation. There were many more to come unfortunately!
We decided to spend the day hiking in Seoraksan National Park, probably South Korea's most popular National Park. 'Seoraksan' means 'Snow Peak Mountain' and the National Park Area itself has been a UNESCO designated World Biosphere Reserve since 1981 due to the huge variety of plants and animals that are found there. We only saw birds, insects and a really cute little chipmunk but there used to be bears in the park up until the 1980's and tigers lived there until about 60 or 70 years ago too. It was a truly beautiful place, all dramatically soaring, craggy peaks, thick pine forests and winding valleys. Being fairly lazy sightseers rather than full on, hardcore hikers, we just stayed in the Outer Seorak area of the park rather than trekking into it's wild heart but we still saw plenty of amazing views. We bought tickets to take the cable car up one of the mountains. We had worried there would be a massive queue considering how a nice a day it was but the tickets had times on them so we spent the wait having a look at the Shinheung-sa Temple and a massive bronze Buddha. 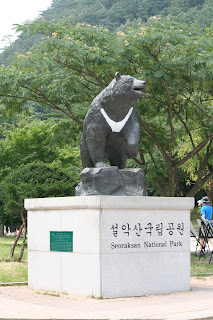 The bear statue that stands in the entrance of Seoraksan National Park. 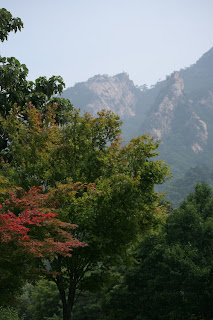 View of the mountains from a forest path in the park. 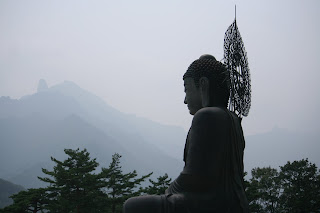 This was the huge and very impressive bronze Buddha statue at the Shinheung-sa Temple. 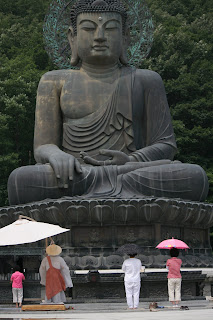 The bronze Buddha from the front. 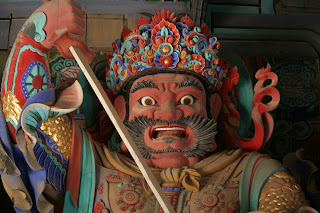 A highly decorated carving of a Deva Guardian (a celestial king apparently) that was standing in the enclosed entrance of the temple. There were four in total and they guard both the temple and Buddhism in general as I understand it. 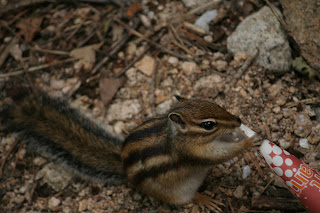 Ice cream loving chipmunk we saw on the side of a mountain. 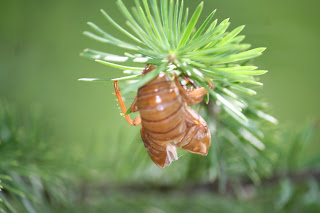 The shell left behind from the moulting of some kind of massive beetle. the whole tree was covered in loads of these.
The cable car that carried us on a 1.1 km vertigo inducing trip almost to the top of a nearby peak was reassuringly Swiss made, not that I doubt Korean standards of engineering just that I have more confidence in Swiss standards! From the cable car station at the top it was a short walk along well maintained wooden board-walks almost to the peak, but then just when you needed it most the board-walk disappeared and the last 20 meters was lose rock bordered by sheer drops on each side, not that that bothered the Koreans who were happily striding around in high heels and flip flops inches from the edge of cliffs hundreds of meters high. 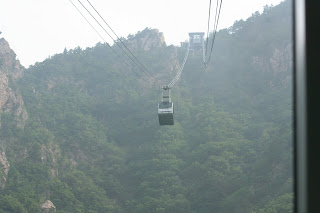 Its a long way up! The view up the cable car wires from the bottom. 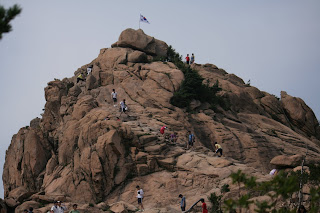 The summit of the mountain that we took the cable car up to. We didn't make it right to the top as I was too much of a coward when it came to scrambling over loose rocks with sheer drops all around. Luckily I have a long lens for my camera so I could cheat! 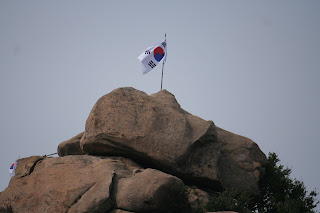 The summit close up! 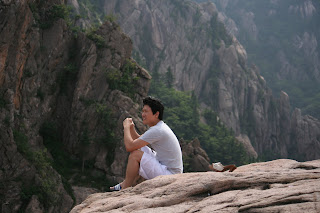 This guy was sat on the very edge of the mountain wearing flip flops and looked totally unconcerned by the sheer drop of over 1000m. Just watching him made me feel sick. 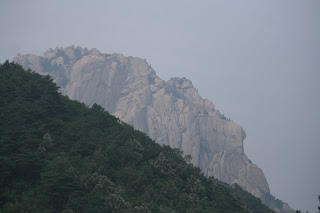 This is Ulsanbawi, a jagged rock formation rising to over 800m in the north of the park. It can be hiked but we didn't attempt it as it was a hot day and you have to climb up an extremely steep trail with bridges and metal stairways with over 800 stairs to get up there. Maybe another day... 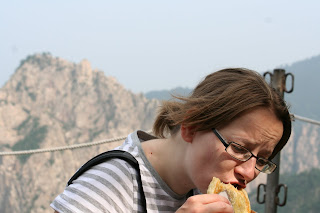 After exploring the top of the mountain we decided to treat ourselves to mulberry jam pancakes before taking the cable car back down again. They were hot and delicious!
We caught the cable car back down the mountain again and went for a wander along a popular valley route to see the waterfalls. We were a bit disappointed though as the one that we saw was more like a gently meandering water slide than a waterfall. Still it was a pleasant stroll and we saw some huge black butterflies as big as sparrows flying about. We tried in vain to get a decent picture of one but they were very camera shy. 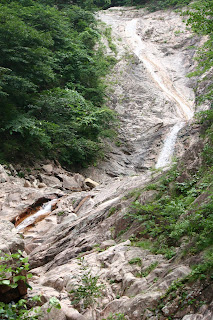 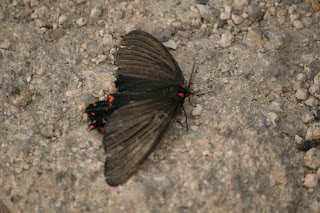 One of those giant butterflies. Or maybe it was a moth, not sure really. 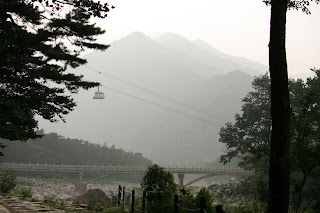 View of the cable car from the valley path we took to get to the waterfall.
One of the strangest things about the park was the weird sounds emanating from the trees, a sort of drilling, sawing chirrup that would steadily increase to a deafening pitch and then drop away again to a dull buzzing. We weren't sure what was making the noise but it followed us throughout our trek around Korea for the next 16 days. 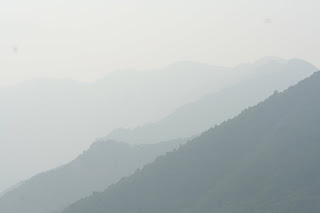 The peaks of the park's mountains had grown blue and misty by the time we left.
We left the park in the early evening and had a seafood barbecue near Sokcho seafront that was nice but not earth shattering. The next day we had planned to go to a big indoor waterpark and spa in Sokcho called Waterpia which had such amazing facilities as a pool filled with little fishes that nibbled the dead skin off your toes (eurgh!) but tourist info told us that it cost 65,000 won per person so we gave up on that idea. We had wanted to do a bit more wandering around Sokcho but as there weren't any luggage lockers at the bus terminal and we had heavy backpacks we decided to get on the road again and took a coach to Gangneung to start the next leg of our journey.
Posted by Sophie at 17:52