Namhansanseong Take 2: Living on the edge

Back in early November, we met up with some of the other Gwangju foreigners with the intention of hiking around the Namhansanseong (an old mountain fortress just outside Gwangju - the name literally means "south of the Han (river) mountain fortress") and admiring the Autumn leaves before it got too late in the year. Unfortunately, one of our number (he shall remain nameless) was late so we didn't get going until mid afternoon which meant we only had an hour or two explore the Namhansanseong before it got dark but we still tried to make the best of it. We all jumped in a couple of taxis and made the slightly longer than expected journey up to the old wall and fortress. Rowan and I have been there before, back in September I think, when the sun was still shining and it was warm enough to go out in t-shirts (see http://bloodriceandnoodles.blogspot.com/2010/10/between-acts.html). 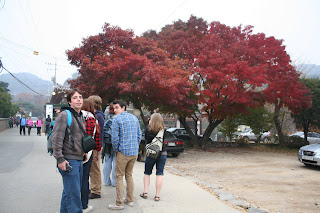 Our intrepid group finally reaches the tourist village just next to the Namhansanseong after a lot of waiting around. 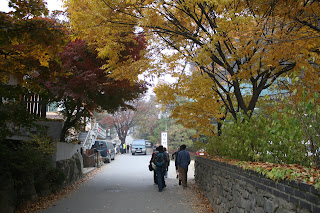 Beautiful Autumn colours on the walk to the Namhansanseong walls. 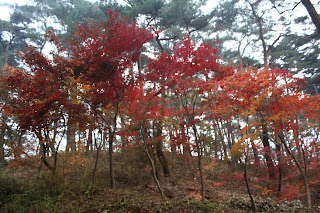 More Autumn colours, this time in red. Yes, Korea really does have it all. 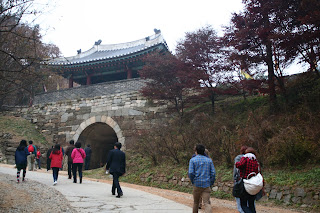 The entry gate to the path along the fortress walls. Little did I know that this would be the entrance into my own personal hiking hell.
We had hoped to walk along the whole length of the fortress wall this time but as we'd made a late start we ended up covering pretty much the same ground as we had done the first time. However, this time we covered it in a much more exciting (read terrifying) way. Instead of walking along the broad paths and up the many steps that make up that path, our group decided it was a better idea to walk on the other side of the old wall on a narrow trail. This was fine at first but as we walked further the path got narrower and the drop from the side of the trail got steeper as the hill (mountain?) fell away to a hollow far below not to mention the fact that the earth was very crumbly in places. Being a complete wimp when it comes to climbing on mountains, I could feel my panic rising. What if I fall? What if it gets dark and we can't get off the trail? What if we run out of beer? Questions, questions. The problem was that we were walking on the other side of the big, old wall and there didn't appear to be any way back through it unless we walked to the next gate and we had no idea how far it was to the next one. The wall there is really high and wide and I didn't really fancy having to scale it, especially with a fairly steep drop behind me. I hasten to add that no-one else seemed anywhere near as bothered by all this as I was. I suppose it's just my Norfolk blood - we don't have hills in Norfolk, well we do but there are so few of them they have their own individual names and were probably worshipped as gods back in the Stone Age by the local lowland tribes. 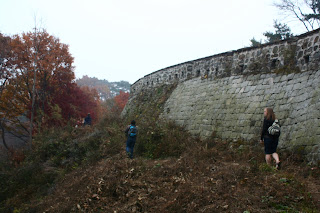 At this point the trail was still quite wide and it was easy going. 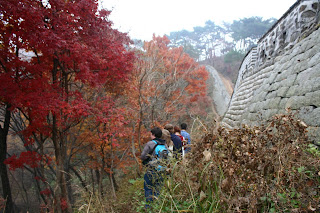 Fighting our way through the 'beautiful' undergrowth as the trail becomes more difficult. Note the height of the wall by this point. 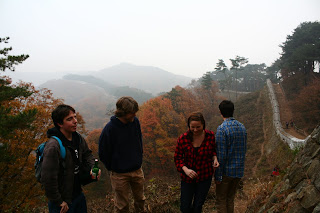 Taking a break from the hiking. Rowan appears to be holding a bottle of soju in his hand - how very Korean of him (Koreans seem to associate hiking with drinking booze and you'll often see people selling Makgeolli, Korean rice wine, at the top of a mountain, presumably to help you roll down it again without breaking too many bones.) 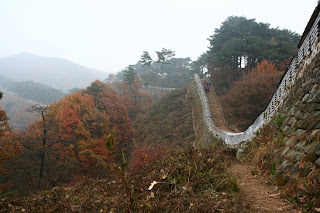 This is one of the last pictures I took when the trail was still not too difficult. After this point, my hands became too slippery with cold panic sweat to operate the camera. I remember looking at those cheerful idiots on the other side of the wall with huge envy shortly after taking this photo.
I could feel the panic getting worse and we had fallen behind the others thanks to my nervously slow pace so we tried asking some passing Koreans where the next entrance through the wall was and how long it would take us to get there. They were proper Korean hiking types, fully decked out in hiking boots, bright coloured hiking jackets, hats and gloves and carrying hiking poles - in other words the standard uniform of Korea's army of hikers. I think there must have been a bit of a communication breakdown though as they told us that the next gate was very, very far away (in Korean) and advised us to turn back to use the gate we'd originally come through. There was no way we would be able to that before it got dark so in the end Rowan and I decided to leg it over the monstrously high wall. Rowan, gentleman that he is, went first and worked out how to get over the damn thing. I think he was pleasantly surprised at how well I managed the climb given my terror on the hike so far. Actually it wasn't too bad and we both rolled over the top of the wall without too much hassle. We were enjoying a well earnt swig of beer when we suddenly heard one of the other guys from our group calling to us. He was on the right side of the wall just like us! In fact, so was everybody else from the group and no, they hadn't all scaled the fortress wall. They had used the hidden passage that went under the wall and we could have used it too if we had carried on just a little further. I was cursing those Korean hikers for their lies! They probably thought we were looking for the next gate though rather than any entrance that would get us on the right side of the wall - communication breakdown. Oh well, at least the others got a good laugh from the mental picture of us scrambling over the wall. 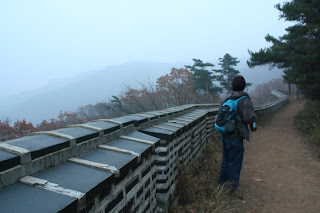 Rowan stands, beer bottle in hand having just thrown himself over the wall, wondering who's calling out to us.
Despite the fear and communication problems it was a good hike. The scenery was beautiful and the Autumn leaves were turning gorgeous colours. It was a really misty day which lent the Namhansanseong an air of eerie mystery (and dampness). Will I go again? Definitely. Will I walk on the wrong side of the wall? Maybe not. 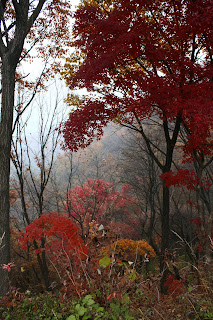 Beautiful red leaved trees shrouded in the mist at the side of the trail. 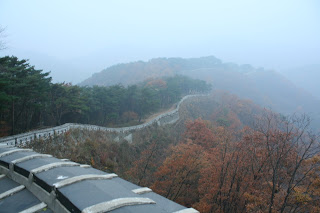 It started to get really misty by the time we had made it back to the right side of the wall. 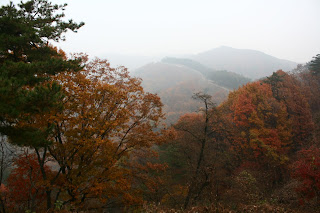 Another beautiful Autumnal view over the mountains. The Namhansanseong wall is just visible in the distance.
For a more amusing take on the Namhansanseong with some bizarre Korean musical accompaniment check out this video- http://www.youtube.com/watch?v=t1cDlRKK7y4 It even has pictures of the temples that are apparently contained somewhere within the walls. We've never made it to see them as we always end up getting there too late to go very far. It's mainly the music that I love this video for though - I think it might be an example of Korean Trot music, a type of old school pop music beloved by Korean grandmas (ajummas) with a pounding disco beat and wailing Korean vocals. Might have to write a post about it someday. Watch this space.
Posted by Sophie at 19:01