Thank you for your listening 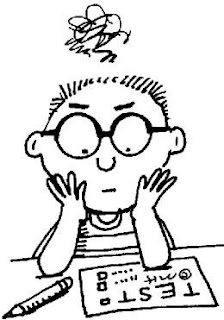 Recently I spent a fortnight conducting speaking tests at my school, I originally thought great, a whole two weeks when I won't have to do any thing except sit back and listen to the kids speaking. Of course it turned out not to be as easy or fun as that! Within a few hours I was bored stiff of hearing the same stilited answers over and over again or of trying to drag any kind of English at all from a depressingly high number of students.

I'd first done some speaking tests a week or two after we arrived in Korea. I was told there were a few students who had been absent during the previous tests just before I arrived. I was just told to ask them a few questions and then give them a grade from their answers. Having only been teaching for just over a week and not having any idea what they had been asked in the previous test or how they had been marked I was more than a little apprehensive about the whole thing. Luckily the two students I had to test were pretty easy to grade and I gave them both a B.

When it came to organising my own speaking tests 6 months later I got little more guidance in how to arrange the test. I was just asked to put together some questions about the last few chapters and ask each student a selection of three or four of them. I created an unecessarily complex grading system which awarded marks for vocabualry, fluency, grammar and listening then combined them into a A-E grade. In common with most Korean testing the system was heavily weighted towards the top marks and the only way it was possible to score E was not to speak any English at all.

The tests were filled with highs and lows from the depressing moments when I got blank looks to such taxing questions as "How are you?" or "What is your name?" to the highs where I started to get invovled in deep discussions with the more able students. The best fun moments of the tests though were the unintentionally funny answers, a couple of which I had to try hard not to laugh at. Some of the best included: "What is your dream job?" "Chicken" and my personal favorite "What are the paralympic games" "Starcraft?" (A very popular computer game in Korea).

Overall the answers seemed to be a mix between the depressingly bad and impressively good, not many seemed to fall in the middle ground.

Sophie also did speaking tests at her school recently although hers were set up differently to mine. The kids at her school had to prepare a short speech about what they wanted to do on their winter vacation and give 3 reasons (often pronounced "lesions") why they want to do that. And they always, always had to finish it with "Thank you for your listening". That's what they've been instructed to say by their Korean English teachers - head-smackingly frustrating but what can you do. Apparently, it's a bit of a memory test really and in common with my tests it's impossible for the kids to fail. The lowest mark they could get was 16 out of 40 and they only got that if they didn't speak any English at all. Of course most of the kids just stumbled through a short speech about how they wanted to visit their grandmother's house for winter vacation because "grandmother is funny", "I can play computer games" and "grandmother gives me many money'. Failing that, their reasons might be "my grandparents have more TVs than in my house" or on a nicer note "I want to see my cousins and play snowball fight with them". So most of the answers were pretty basic and places they wanted to go varied from grandmother's house to Everland (a big Korean theme park near to where we live) to going abroad so that they could experience flying on a plane for the first time.
There were a few funny and more detailed answers though including the girl who wanted to go to France to see all the handsome French boys and to eat lots of brad and the boy who said he wanted to go to Afghanistan for his winter vacation so he could "join the Taliban, help Afghan children and shoot the gun". The most disturbing answer that Sophie got for her speaking tests was the boy who said that he wanted to visit a "war place" for his winter vacation because:
Unsurprisingly, Sophie was a bit worried by this and spoke to the boy's co-teacher about it though apparently she did given him a good mark as she doesn't want to be a target when he goes on his murderous rampage. Sophie also had one opinionated answer in a speaking test - a rare thing in Korea! The boy said his 3 reasons for wanting to visit Sapporro, Japan were:

It's nice to hear someone in Korea being positive about Japan. There is a long history of conflict between the two countries and many people in Korea are understandably upset with Japan's conduct during the years when they occupied Korea but clearly the times are a-changing.
Sophie did a full round of speaking tests back in the summer too that were set up the same as the winter ones. For the summer tests, her students had to talk about their dream job and give 3 reasons for why they wanted to do it. The most popular jobs included doctor, dentist, teacher and cook. There were a few more interesting occupations cited though including baker, geneticist, political journalist, interpreter and a couple of kids who wanted to be diplomats. Sophie said it was a shame she couldn't give the students extra points for originality.
Most of the students said they wanted their dream job because they wanted to make a lot of money or because they wanted to help sick people or support their parents or more amusingly because their parents wanted them to do it. One kid said he anted to be a doctor so he could help poor people and by helping them he may allow them to know the love of Jesus! Another girl said she wanted to be "a good mom" when she grew up so she could "make babies and babies have to obey me"! She had her priorities sorted out by the sounds of it!
Thank you for your reading!
Posted by Rowan at 21:26