Careful readers of this blog may have noticed that we are more than a little behind in our posts, well I say ours, Sophie is still keeping going, I haven't posted anything in so long that I barely remember it's existence! Well there is a reason that we got so far behind, and to understand why you have to cast your mind back to a lovely spring day back in March this year...


Everything was planned out for for the next year, we'd decided to stay at our schools, which despite their idiosyncrasies weren't bad places, we were used to the curriculum, we'd built up good relationships with the students and teachers and were generally looking forward to doing another year. Then it all fell apart. Sophie got called down to the office at her school one morning to discover that her school wasn't going to be able to renew her contract. It seems that the organisation which runs the foreign teacher's program (called GEPIK) had decided that it was going to "streamline" it's hiring process to make it more "efficient"  - bywords for money saving job cuts if ever I've heard them! So their decision was that there would only be two periods a year when foreign teachers could be hired (in September and March) and there would be no hiring outside of these months. Unfortunately for us, we were hired in May (outside of the hiring months) and missed the cut off date for the new rule being introduced by five days!

When I heard this I called up our local area coordinator in a bit of a panic. I discovered though that my contract was funded differently to Sophie's and was paid for by the city authority rather than the province wide agency that was "streamlining" so I could still have my contract renewed and stay at the same school. The next big shock was the discovery that Sophie's school alone provided the money for our accommodation, and as they were losing their funding there would be nowhere for us to live. 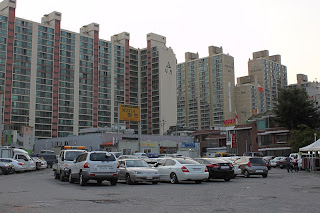 Home sweet home - our apartment building in Gwangju. It may look a bit like a bleak, Soviet era concrete box but it was actually a really nice apartment, huge, new and with great views. We were really sad to lose it, especially the oven that came with it (ovens are not standard in Korean kitchens)! 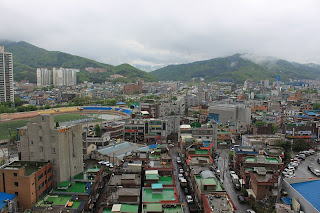 View over Gwangju from the front balcony of our old apartment. It was on the 15th floor and offered unobstructed views over the city. 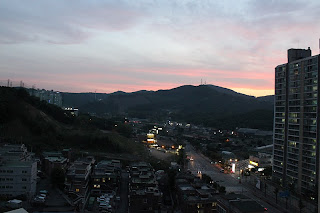 Sunset over the mountains viewed from out the back of our Gwangju apartment.
So the end result of this streamlining was that Sophie would lose her job and we were going to lose our apartment - not good. We tried looking for new public school jobs but without much success as it's always difficult for couples to find jobs with shared housing working for the public schools, especially outside of the peak hiring times. Luckily (in a way) a teacher at my school had just moved from a school in the nearby city of Hanam and told us about a job there. After a bit of umming and arring and faffing around it was arranged that Sophie would take the job there and the accommodation provided and I would commute from Hanam to my job in Gwangju every morning.


This meant that Sophie would lose her 2 weeks of extra holiday to visit home that you get when you renew your contract at the same school as well as her flight home, pretty crap when you consider those benefits are worth a good few thousand pounds. But the worst thing about the whole affair was the poor communication from GEPIK and the last minute notice that we got. In Korea you get used to being told things with less than five minutes notice, but you'd think a change in policy as big as this might have been announced a little earlier!


I suppose at least we still have jobs which is more than many people can say in these days of recession and other bullshit. Although given some of the problems that were to come, maybe we'd have been better off without new jobs, but that's for another post.
Posted by Rowan at 22:37