Over several rather chilly weekends in March and early April we visited three of Seoul's major museums. We hadn't really looked at any of Seoul's museums up until this point despite having been in Korea for 10 months or more as we'd decided to save them up as a fun activity to do in the bitterly cold winter months. Obviously we must have got a bit distracted as we didn't make it until the very end of Winter/ beginning of Spring but, hey, the best laid plans and all that...
The first museum we visited was the National Museum of Korea which houses an astonishing number of important artefacts and relics (over 220,00 according to Wikipedia) that tell the story of Korea's history. It's a huge, beautiful building and very new, having only opened in 2005 after 8 years of construction. Apparently, it's the sixth biggest museum in the world and according to Wikipedia "the main building was built to withstand a magnitude 6.0 Richter Scale earthquake" though Korea thankfully doesn't get too many of those (most quakes here are well below 3.0 and pass unnoticed just like back home in England).

Outside the National Museum of Korea (from Wikipedia).

Exhibition Hall of the National Museum of Korea (from Wikipedia). 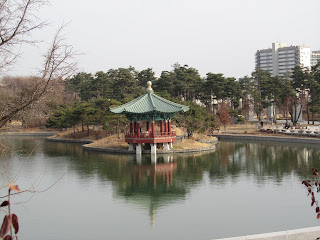 The museum also has extensive and very pretty grounds containing collections of pagodas and lanterns and a large pond.
In fact, the museum was so huge that we only managed to look around the 1st floor on our visit so we need to go back at some point. The 1st floor was very interesting though. It contains the "Archaeological Gallery" and the "Historical Gallery" and contains all sorts of national treasures (all numbered and ranked of course!) that span thousands of years including stone hand axes, Buddhist pagodas and royal artefacts. In the historical gallery, there was a different room for each of the main periods form the the Unified Silla (7th Century AD) through to the Joseon Dynasty  (ended in the 20th Century). We didn't make it to the 2nd and 3rd floors but apparently they contain art galleries and sculpture displays of Korean and Asian works. 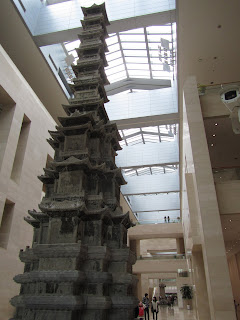 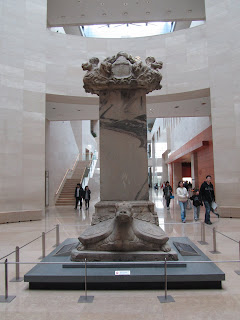 A Buddhist stone stele featuring the body of a turtle. According to Wikipedia, these are usually erected for funerals or commemorative purposes and have the names of those to be remembered inscribed on the vertical slab. 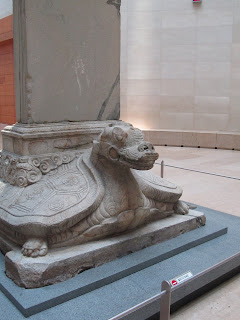 Detail of the stele. The body is definitely a turtle but not sure what the head is supposed to be!
I would definitely recommend a visit to this museum as it's nicely laid out and contains lots of interesting exhibits, most of which are well labelled in English. I imagine the gardens would be a nice relaxing place to hang out when the weather is warmer too. I hope we'll make it back for a second visit at some point so we can advance beyond the first floor!
The next museum we visited was the Seodaemun Prison History Hall, a much more sombre and depressing place but I think even more interesting than this museum. Check out the next post about Seodaemun here if you're interested.
Posted by Sophie at 16:20