Wednesday 2nd June was Election Day in Korea so we got the day off work - wahey! Why don't we get the day off in the UK? It's a great idea! Anyway, Dean convinced us to go down to Busan on Tuesday night after school so we would have Wednesday daytime on the beach and go back Wed evening. I think this turned out to be a slightly ill-advised trip as it took us a hell of a long time to get there. Unfortunately, Gwangju is at least 2 bus rides away + taxi ride to get to the nearest KTX (Korea's high speed 'bullet trains') station and we had to contend with rush hour, holiday traffic so it took over 2 hours just to get to the station! The train journey to Busan then took another 3 hours or so followed by a 30 min taxi ride across Busan to get us near the beach for the following day - ouch! Expensive and time consuming but it was nice to chill out on Haeundae beach on Wednesday! When we told other people we were planning to go to Busan for a day they had seemed surprised - now we know why - it's too far really for a day trip. It's pretty much the other end of the country from where we are! See the map below - we live just east of Seoul near the city marked Songnam. Busan is on the south coast.

The train ride down to Busan was interesting. We had to buy slightly more expensive tickets than we really wanted as those were all that was left. I was really tired and was hoping I would be able to doze off on the train but 5 mins into our journey a big screen was lowered from the ceiling in our carriage and the blinds were all pulled across our windows by KTX staff - so much for seeing something of the Korean countryside. We had ended up in the movie carriage and had little choice but to watch the film as the volume was turned up incredibly loud. Just to add to the weirdness, it was a Japanese film set partly in Korea. The only bits of the film we really understood were 'Do you speak Englishee?' as everything else was either in Japanese or Korean. Still it was pretty entertaining trying to work out what the hell was going on! Film was called Tokyo Taxi if anyone's interested. I think it followed the journey of a Japanese indie star who seemed to be getting a taxi from Tokyo to Korea (or something like that!) and the adventures he and his taxi driver had along the way including the start and sudden inexplicable end of what appeared to be World War 3. Like a kind of Asian Odyssey, but in a taxi.

Do you speak Englishee?
Anyway, we finally got to Busan and found a cheap motel for the night and were refreshed and ready to go the next morning. We spent pretty much the whole day on Haeundae beach, South Korea's most famous and most popular beach. It was a really hot day and we went swimming though the sea was still pretty cold to be honest. I think us Brits stood out as we were in shorts and t-shirts - Koreans don't generally like to get a tan as in the past getting a tan was linked to being a poor person who had to work outside all day. Because of this, most Koreans we saw at the beach were wearing lots of clothes, carrying parasols (or sun umbrellas as they seem to call them) and some were wearing face masks! We even saw one lady lying on the beach with a towel over her face to avoid the sunshine - don't why she didn't just stay inside! Most of the Koreans we saw swimming in the sea swam with all their clothes on too which was quite an amusing sight. One little girl was trying to play with her friends in the shallows with her little dress billowing out around her.
There was a sand sculpture festival planned for that weekend and we saw some of the entries being prepared with heavy moving equipment and scaffolding! 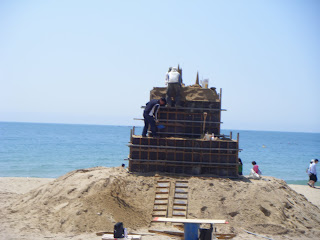 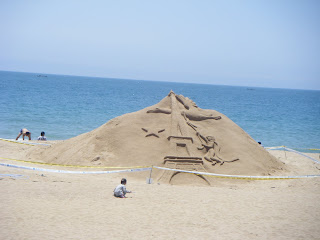 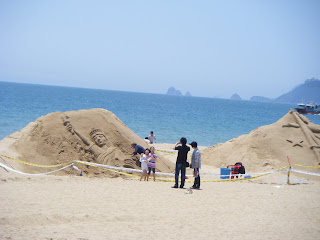 And a sandy Statue of Liberty
We didn't have time to explore much of Busan other than the beach but we did have a look round China/Russia Town, an area near the KTX station with various ethnic restaurants, clubs, shops and brothels of course. We can read the Russian alphabet and it was surprisingly comforting to be able to read shop signs for a change! The train journey home was a lot more normal than the one to Busan had been. I was able to take some photos out of the window of the passing countryside of Gyeongsamnamdo. the province surrounding Busan in the SE corner of Korea. 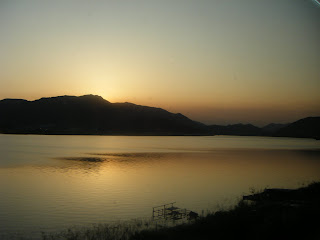 Pictures through the train window 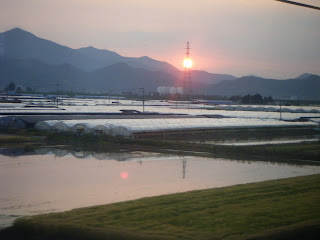 Rice paddies from the KTX window
We finally got home about 11pm after having to catch a taxi from the station to save some time. Overall a fun trip and we will definitely go back to Busan again but maybe for a long weekend next time!
Posted by Sophie at 16:31