Back in April we travelled with our posse from Gwangju-si to the Spring Flower Festival at Yeouido in central Seoul. It was one of the first properly warm weekends of the year after a long, bitterly cold winter. The arrival of Spring in Korea is celebrated by lots of local festivals all over the country where people flock to admire the wild flowers and enjoy a bit of stroll in the sunshine. 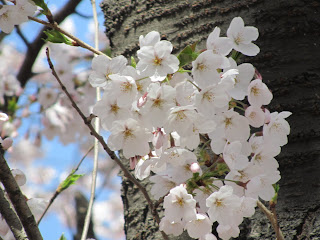 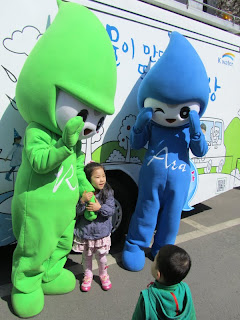 The two festival mascots posing for photos.
Of course, the blooms that most people go to see are the cherry blossoms and Yeouido is the most popular place in Seoul to see them. Yeouido is actually a large island in the Han river and is one of the most affluent areas of Seoul. Apparently, Koreans call Yeouido "Korea's Manhattan". It contains Korea's National Assembly Building where the government meet. The street behind this building is lined with around 1400 cherry trees and is the most famous cherry blossom street in Seoul. Naturally that means huge crowds of people and a scrum on the subway to get there and to get away again but it was a really pretty sight and worth the effort. The cherry blossom street ran right next to the river Han and the trees and their flowers were so dense that they formed a kind of snowy white and pink tunnel. 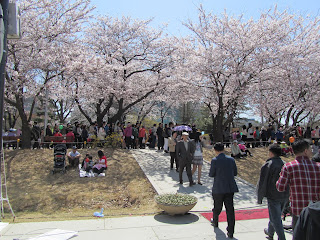 Walking along the most popular  cherry blossom street in Seoul. 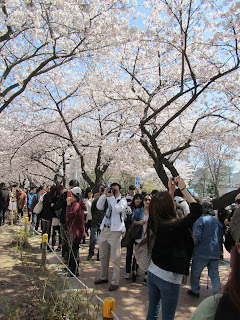 In places, the cherry blossom was so dense that it formed a tunnel, a pretty tunnel filled with snap happy folk armed with all kinds of cameras. 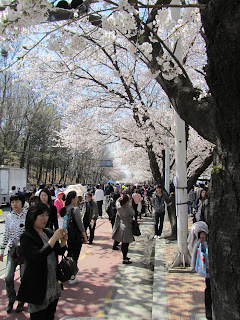 Another shot of the blossom as it was just so pretty! 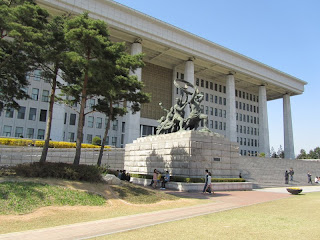 The National Assembly Building where the Korean Government sits. According to Wikipedia, from 2004 - 2009 the Korean National Assembly gained international notoriety for its frequent violent disputes including "open physical combat". In 2009 "Assembly members battled each other with sledgehammers and fire extinguishers". Hardcore! 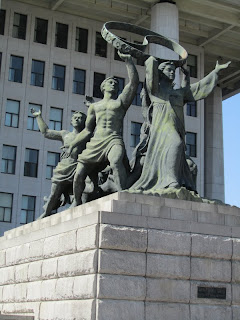 Some inspiring type statue in front of the Assembly building. Or are they just getting ready to throw that metal ring at other Assembly members?
The festival wasn't all flowers either. As well as the blossoms, there was a samul nori performance (traditional Korean folk music), a flower decorating exhibition and some other arty, cultural stuff including a bizarre drama/modern dance performance by a man and woman on a stage - the man just stood there looking impassive while the woman jumped and stalked about the stage in a green dress - weird. I still have no idea what that was all about. There was also the usual food and drink stalls and one stall filled with strange animal and insect displays, some alive and some dead. Not sure what the link was to the Flower Festival there but whatever. 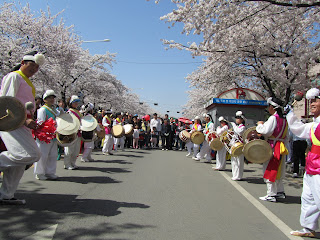 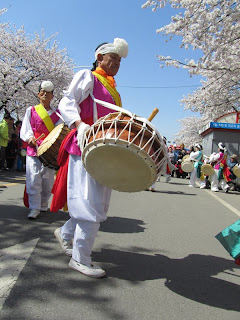 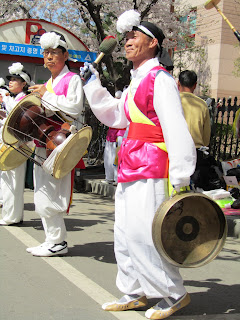 The performers also use big metal gongs and pipes to create the tune. 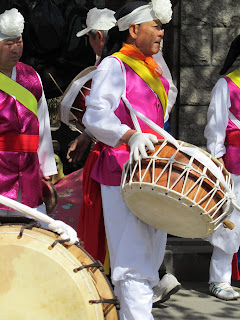 Some of the drums were pretty massive compared to the size of the players. 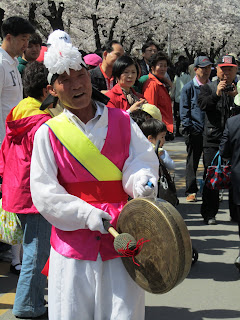 Samul nori looks impressive and it gives older Koreans a chance to jump around making a lot of noise - though of course they never need an excuse for that anyway! 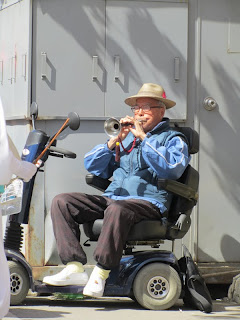 This guy was cool. He played the pipe for the samul nori performance from his mobility scooter. 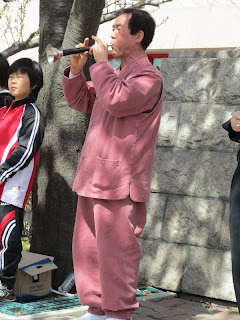 The other pipe player. 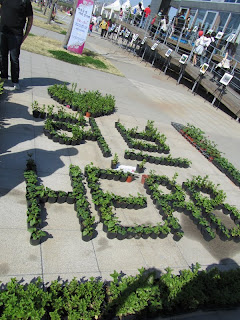 Koreans express their love of herbs. 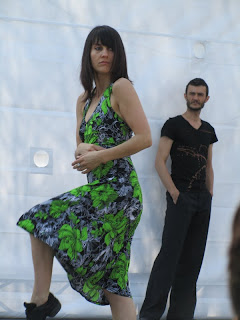 The two actors in the bizarre stage performance. The guy just stood there stony faced while the woman danced around the stage. 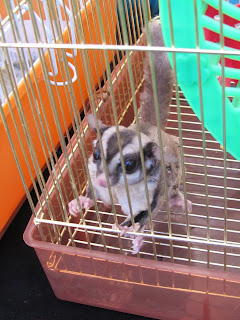 A caged sugar glider at the weird animal and insect tent. It was very cute looking but I found it's little pink paws a bit disturbing somehow. 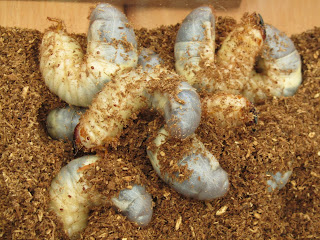 Some really gross looking grubs at the same stall. I'm not sure but I think they were selling them as pets. 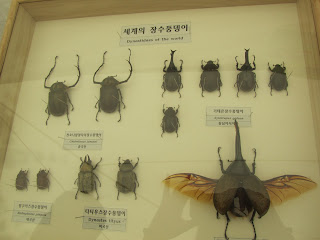 Most of the insects in the tent were dead and on display ion glass cabinets like these unfortunate creatures. 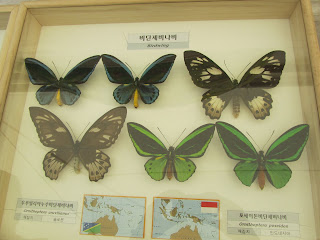 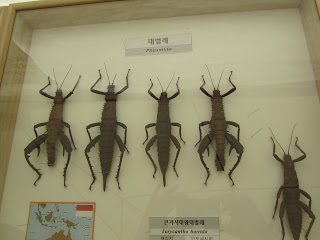 More weird and deceased bugs.
It was a really nice place to stroll around and a good opportunity for taking photos, something I'm always keen to do (though unfortunately so is everyone else in Korea)! Lots of people were riding bikes and flying kites by the river Han and there were some folks out kayaking there too. 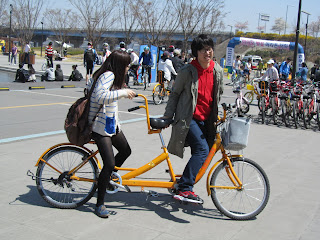 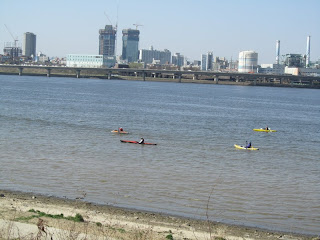 Kayaks on the Han river. 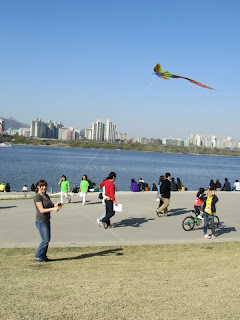 Our friend Amy flying a kite by the Han river.
Overall, it was a very pleasant day out and a great way to welcome in the Spring. The crowds were quite intense but there was plenty of space in the parks at beside the Han to chill out and sit down. There were also lots of convenience stores around to pick up beer and snacks and everything is better with booze. 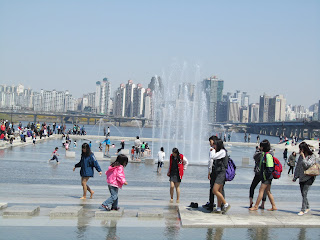 Kids playing in the fountain in a park by the river. 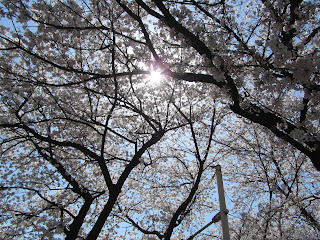 Sunshine through the trees in Yeouido.
Posted by Sophie at 22:20